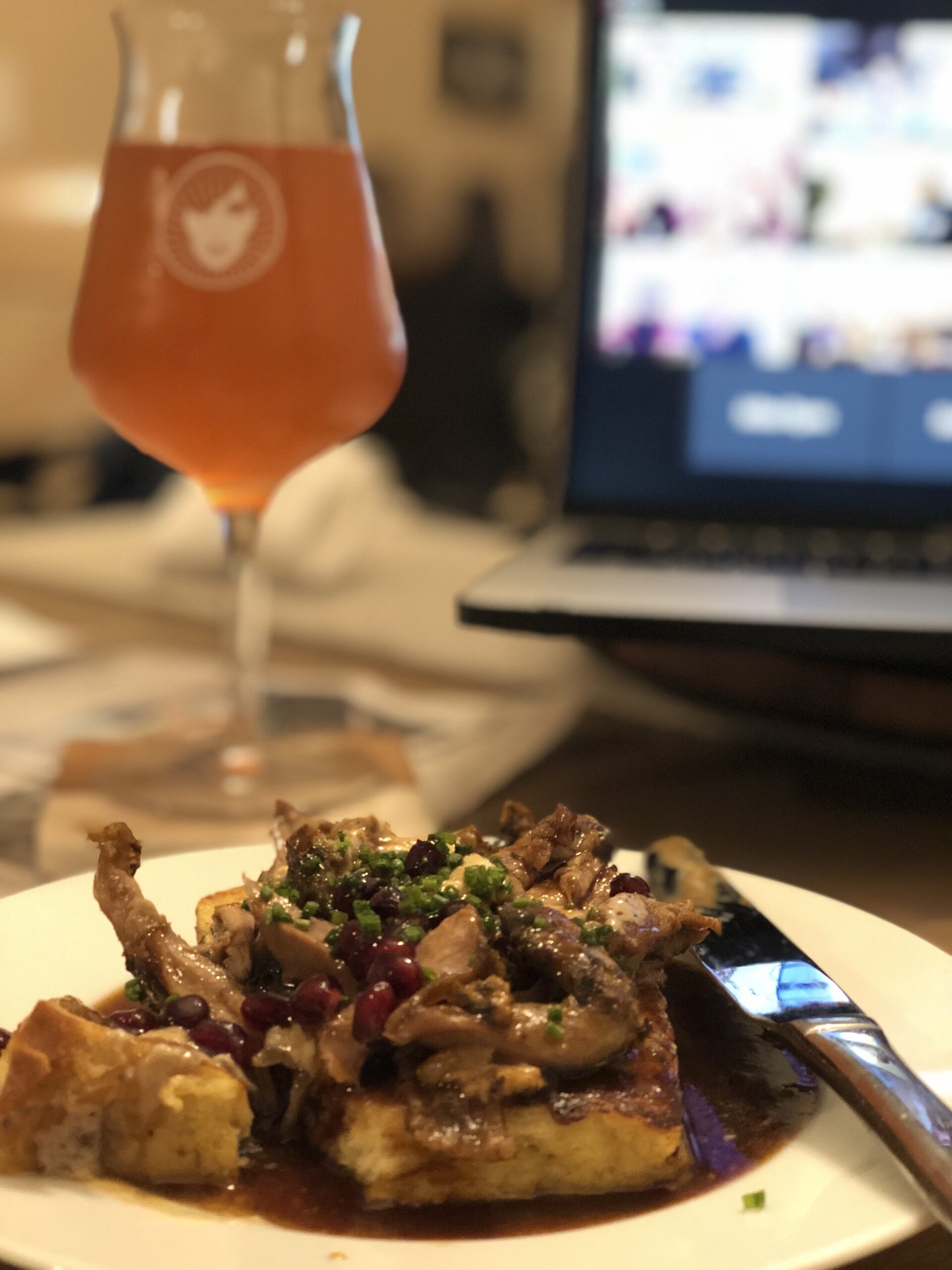 Virtual Beer and Food Pairings Should Continue After the Pandemic Ends

Everything from pickup to logging onto Zoom was safe, convenient, and well-timed. Roughly 13 couples met Roho Kitchen’s head chef, and LauderAle’s taproom manager and head brewer on a Zoom call.

Here are my takeaways…

Tuesday night, I ordered my tickets online. A few days later, I got an email saying to request a pickup time between 1 and 5 p.m.

At 4:30 p.m. I showed up and called. My meal-kit was brought out to the car. There were labeled, crowlers and pre-packaged meals. The kit came with instructions, a Zoom URL and password. 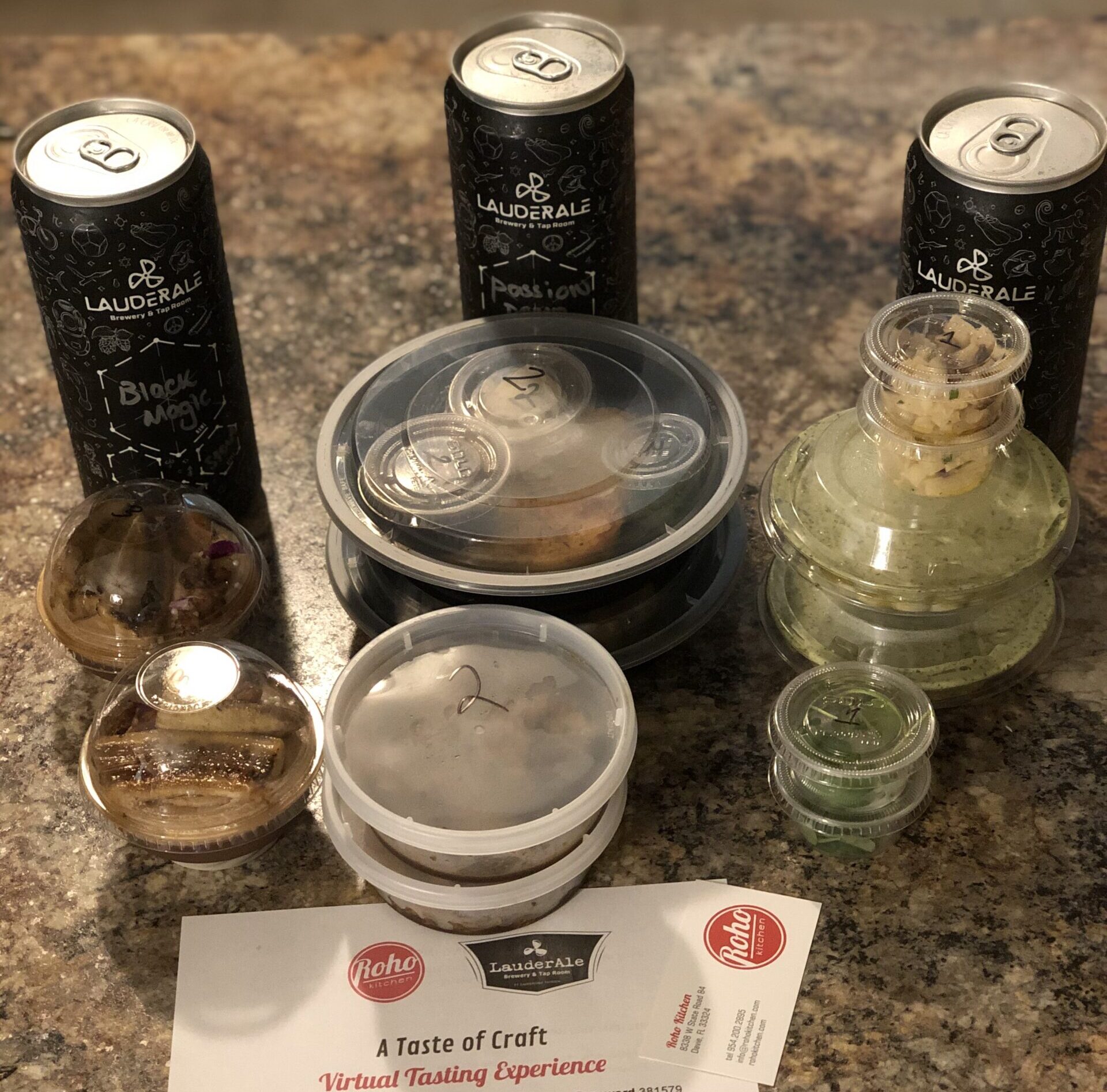 The toughest part was preheating the oven to 350 degrees.

The food and beer were a great match

Two beers were specifically brewed for the event, and those paired best with their respective dishes.

The Pomegranate passion fruit sour ale was brewed to go with the Duck Toast Foir-Gras. Passion fruit really shined and balanced well with the brioche french toast and pomegranate-maple syrup. 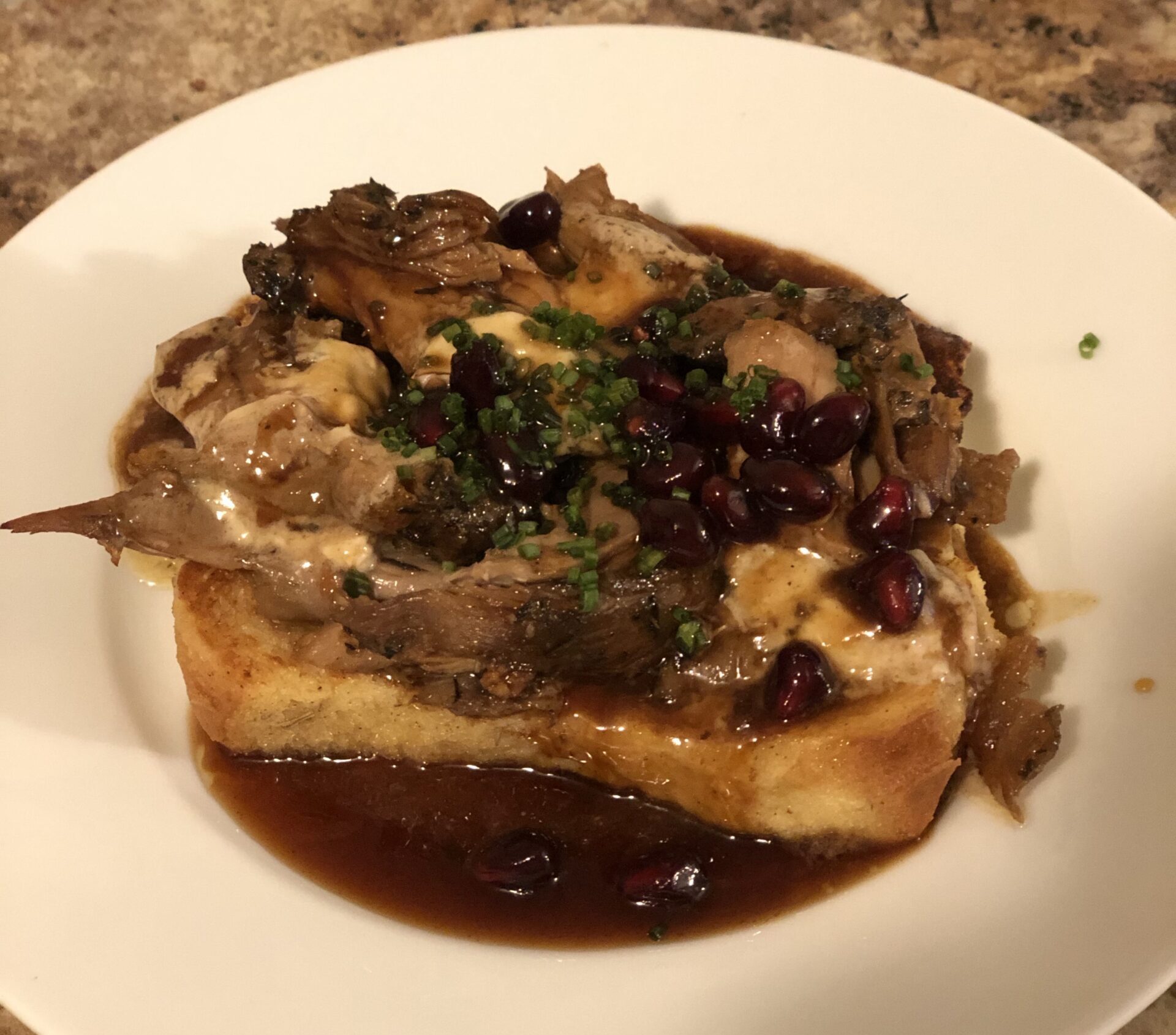 The same goes for the Chunky Monkey dessert. Panna cotta and mousse are smooth with chocolate and peanut butter flavors. Stouts are known for having a really smooth, silky mouthfeel. 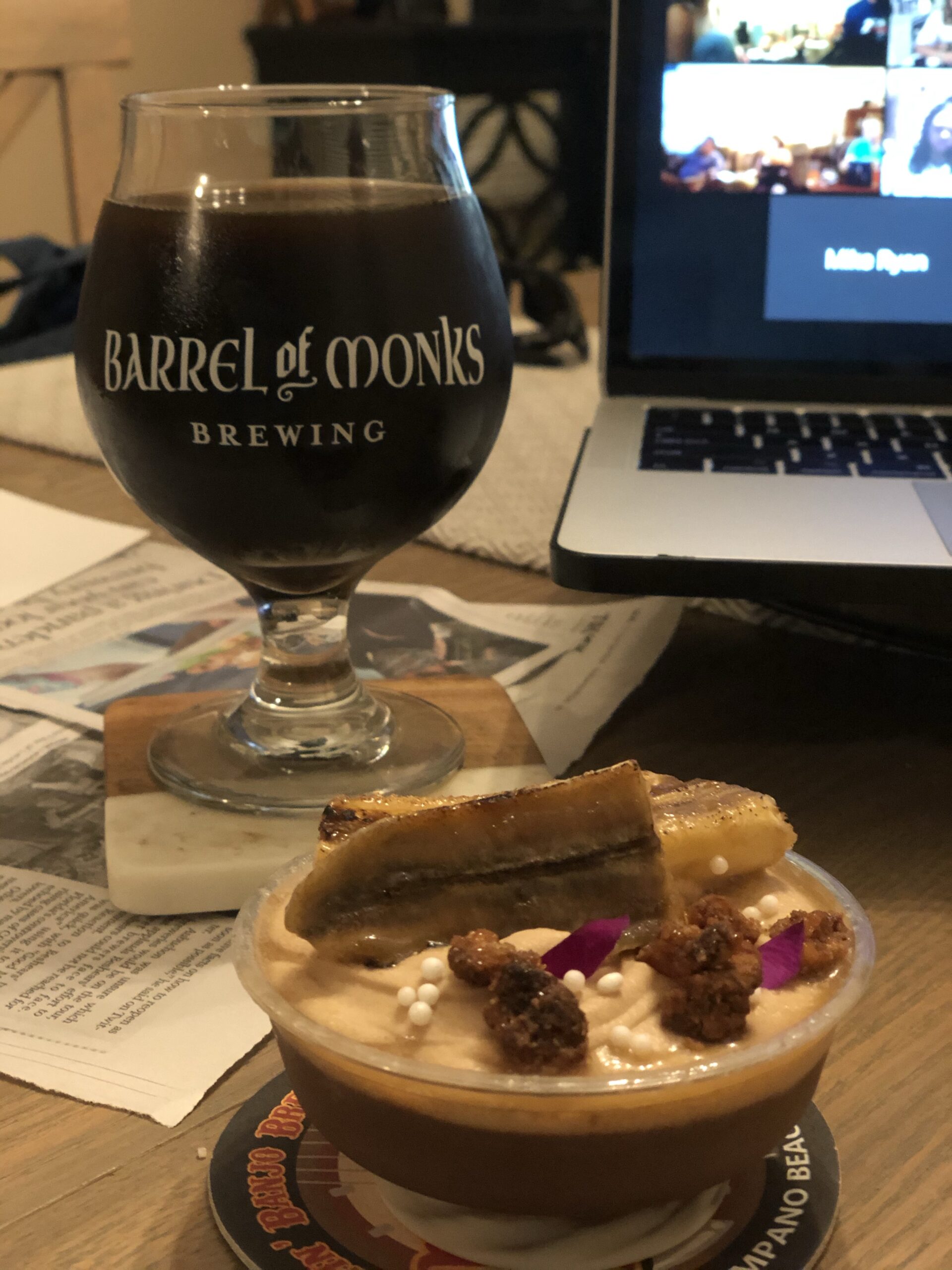 I do have one complaint…

All beer should be original to these events

LauderAle’s “Lunch Money” pale ale is a flagship that I’ve had many times. That beer was used to pair with the first course, a Peruvian Lump Crab Causa.

The Causa was served cold with potatoes, crab meat, cilantro aioli, and great Peruvian spices. It was delicious and something I’ve never tried before. 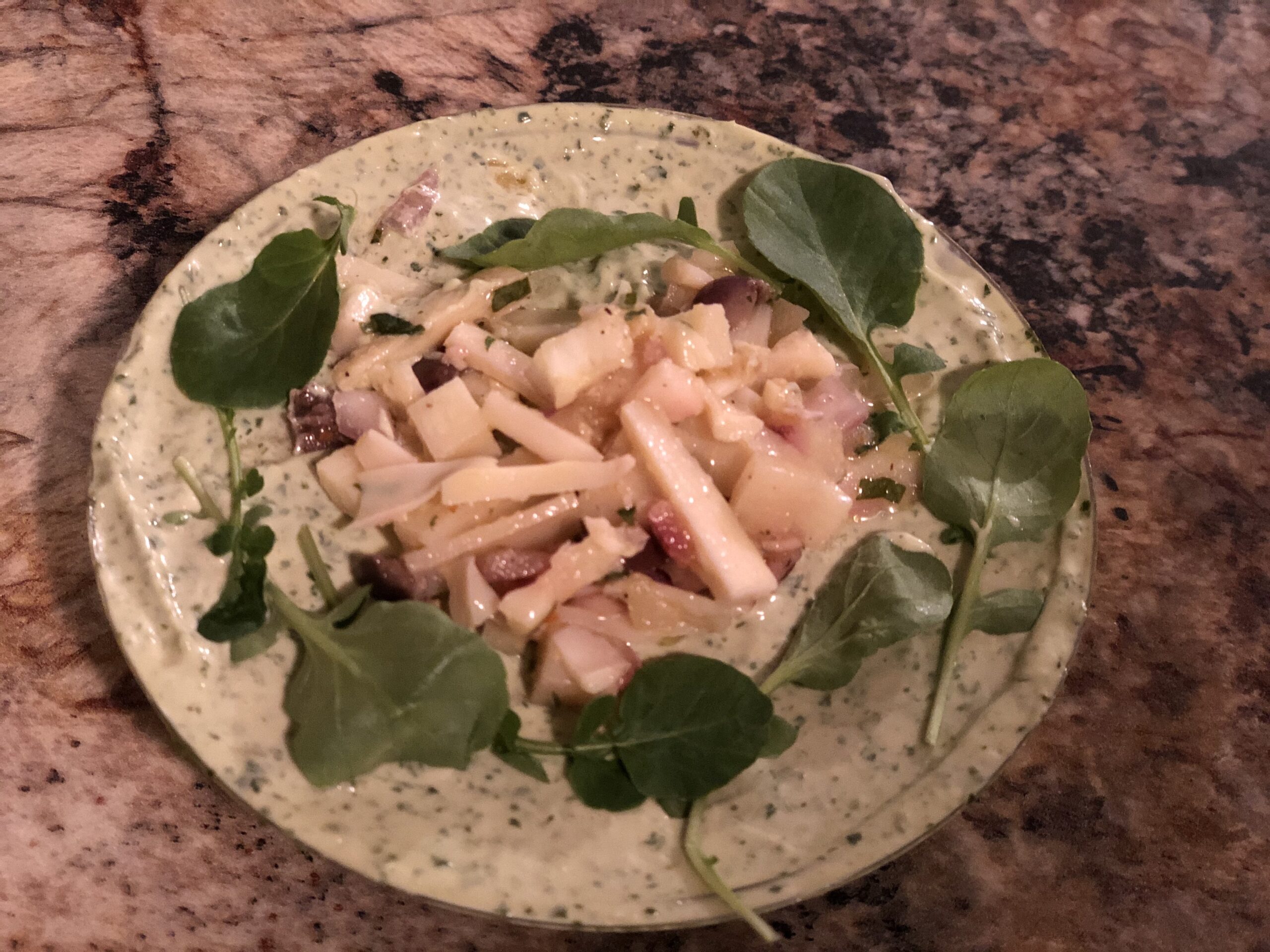 Don’t get me wrong, the beer complemented the dish well. But so, would any lighter, hoppy-style pale ale beer. I personally would’ve liked a hazier IPA to go with the spice of the aji amarillo.

Having the other two originally crafted brews just made it special and more worth the $105. I just would’ve liked all three to be unique to the event.

At the end of the meal, one couple said they hoped Roho Kitchen’s virtual events “won’t go away” when the cooking school can host full classes on-site again. I agree 100 percent.

When you’re that full of good beer and food, who wants to drive anywhere? It was nice to just park it on the couch after.