They’re all located within a 13-mile radius, and each brings something unique to the table.

No two breweries should ever be the same. Luckily I have three not far from each other that couldn’t be more different.

The Mack House, Orchestrated Minds, and Invasive Species are three of the closest breweries to my home.

To me, the best breweries reflect the owner’s personality – from the beer styles they focus on to the music in the taproom.

On a recent visit to all three of these breweries in less than 24 hours, I couldn’t help but notice things I love about each.

The Mack House is a rare breed among South Florida breweries. It really reminds me of going to a friend’s house who happens to homebrew and his brother is on munchies duty for the night.

There are six Mack House original rotating handles on draft (three guest lines) and three grilled cheese sandwiches. The food choice has always been interesting to me.

Grilled cheese sandwiches from The Mack House have always been something to look forward to. Most Fridays through Sunday, they put out a weekend special grilled cheese that changes week to week. Monday through Thursday, they carry their standard Classic, Caprese, and Deep Dish. Here are the ingredients for each:

There’s nothing hype or trendy about this place – and that’s why I love it. You’re not going to take home 16-ounce labeled cans and they only recently started filling 32-ounce crowlers for to-go beer. It’s always been more a local dive bar than most bigger breweries.

I’ve always loved this place for how laidback it is. Over the years, I’ve had plenty of friends tell me some breweries come off as pretentious and unapproachable. In my opinion, it’s more the people who hang out in breweries more than the owners. The Mack House is a great example of a place welcoming to anyone no matter how interested in beer they currently are. It’s family-owned and operated and the three guys consistently working take the time to know their customers. 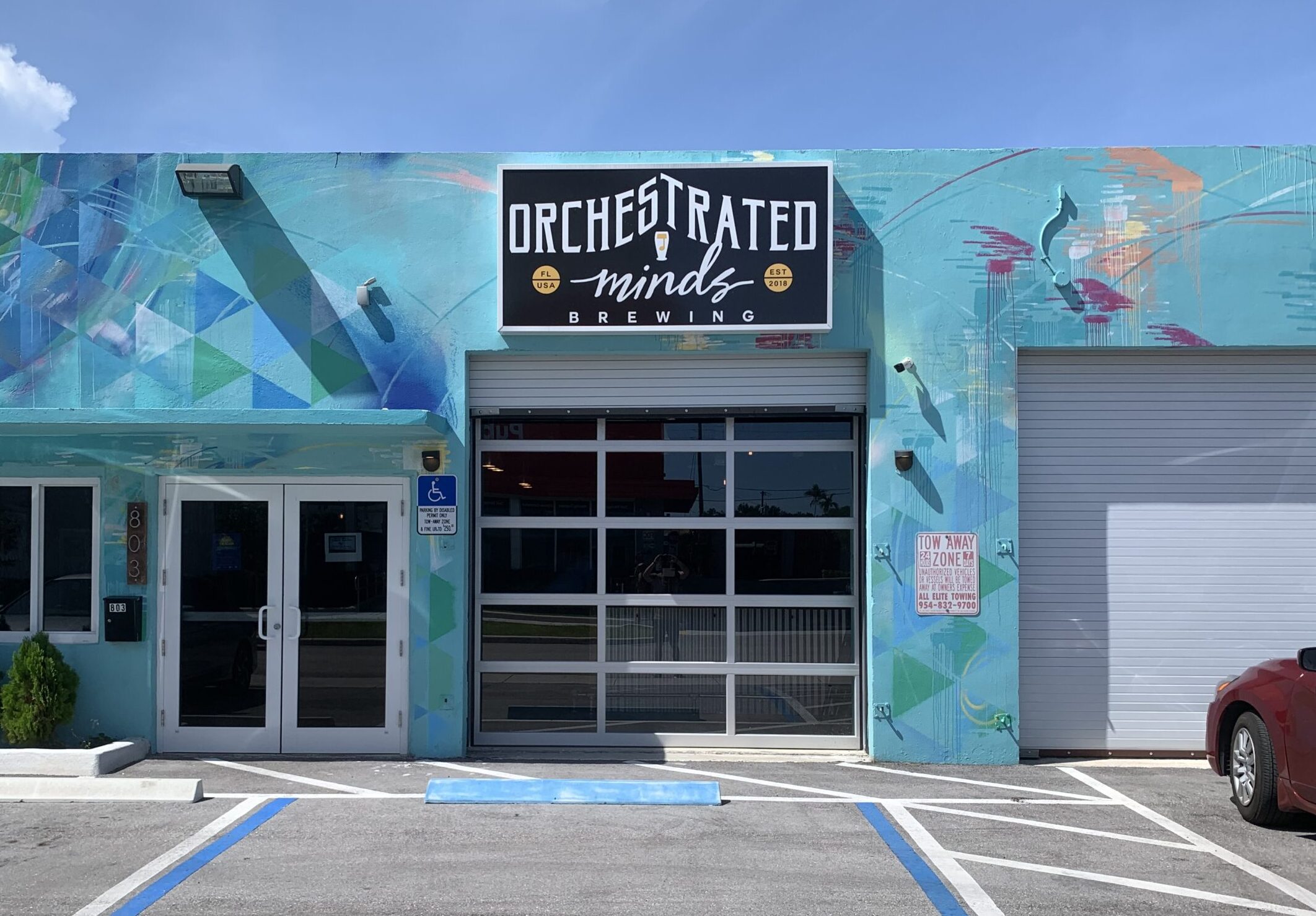 Located just under three miles East of the Broward Blvd. exit off I 95, a 1,000-square-foot taproom is pouring some of the freshest and most unique styles of beer in Broward County. This is a small brewery I predict will soon grow tremendously. Owners Davy and Jaime Martin just purchased a 3.5-barrel brewhouse and a few new fermenters. More than two years of hard work and passion have built a solid foundation that looks hopeful to expand.

At Orchestrated Minds, the beer is constantly changing. Every week, there are different styles of beer brewed on a 1-barrel brewhouse. It really keeps things different and exciting. There are also pretty frequent can releases of some of the best new hazy IPAs and barrel-aged stouts. Some of the most memorable South Florida stout releases this past year have come from this nano-brewery.

I love that I rarely see the same beer twice. The most interesting to me is when they throw an Extra Special Bitter or Bohemian pilsner on the board.  Where larger breweries can’t always take a gamble on unique beer styles because they may not sell an entire 15 barrels, Orchestrated can and does try everything.

In September 2019, Davy Martin told the Sun Sentinel he wanted Orchestrated to be “family- and dog-friendly, but also a grownup and kind of sexy hangout spot.” There isn’t a kitchen but there’s usually a local pop-up food vendor on site. So aside from keeping the beer menu fresh and new, there’s also something different food to nosh. The owners and staff are huge hip-hop fans and that’s all you hear playing. A few months ago, Orchestrated dropped a barrel-aged pastry stout with rapper “Styles P” on the label and hosted him for a meet and greet for their customers. Then more recently, they brewed a collaboration beer with 3 Sons Brewing with a name and label paying homage to “Benny the Butcher.” 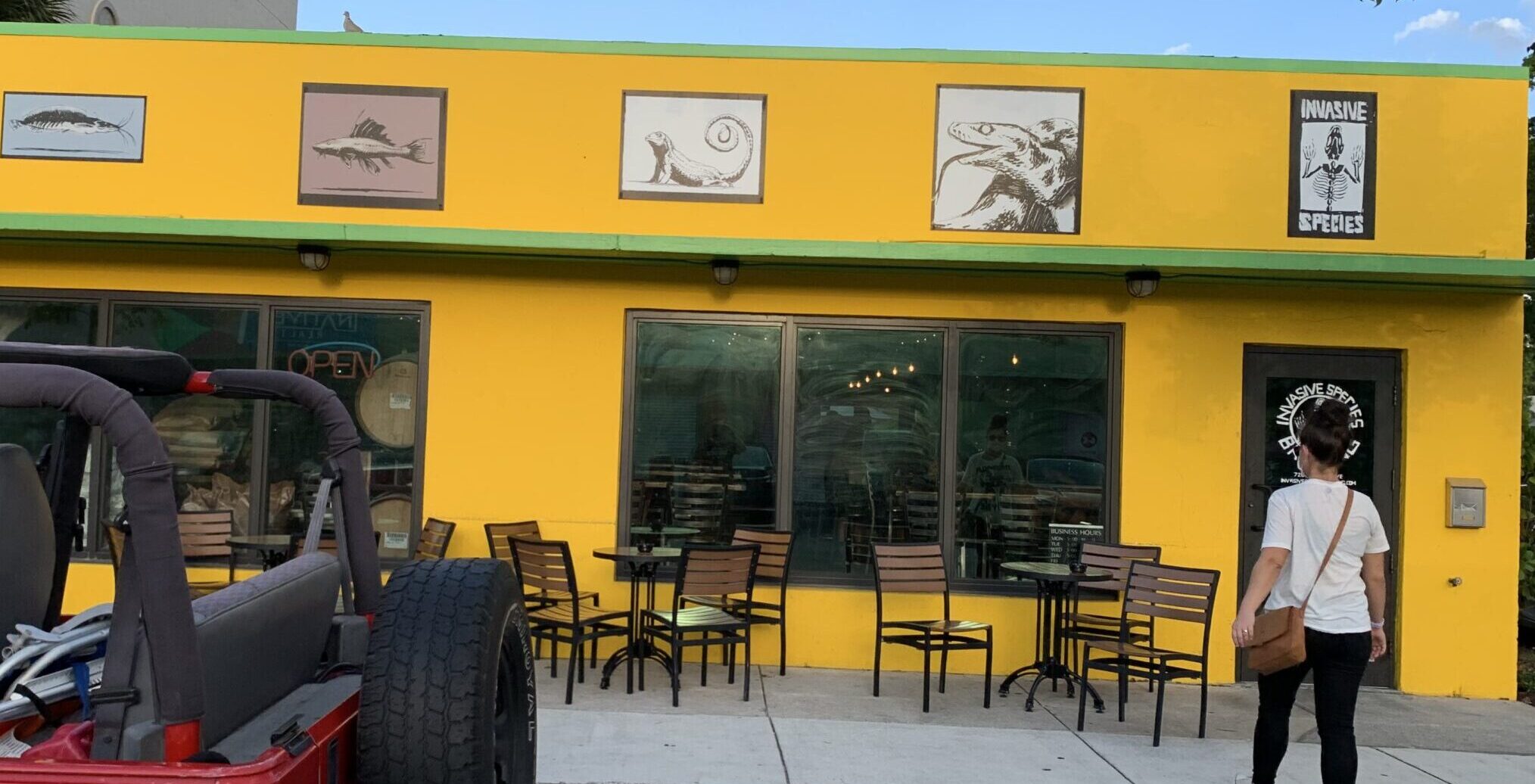 There is nothing of Invasive Species Brewing that can ever be duplicated. Invasive Species touts it’s a “brewery-owned experimental brewery with vibes as original as the beers.” Those are simply the best descriptions of this Fort Lauderdale landmark.

For more than four years, the 2,800 square-foot brewery and taproom has been serving up some of the most well-executed beer in South Florida. Co-owners and brewers, Phil Gillis and Josh Levitt make everything from German-style ales and lagers to the haziest juice bombs and decadent sweet-fruited sours. A few times a year, they release barrel-aged pastry stouts that still draw a crowd in the day and age of Oznr releases.

Over the past few years, I’ve felt I can walk into Invasive Species with my eyes closed, point to the board and whatever beer my finger lands on is sure to be amazing.

Gillis and Levit are both co-owners with Chris and Jordan Bellus, owners of the Fort Lauderdale landmark in craft beer, the Laser Wolf. Together, this quartet brings an alternative and iconoclastic vibe that puts a middle finger up to the mainstream and says “we can make better beer and make it cooler.”

On the outside, it’s a bright and vibrant yellow and green that draws you in. The inside is a dark, dive bar vibe. The taproom is jam-packed from wall to wall with taxidermy. They play obscure music ranging from eclectic jazz covers of top 40 pop songs to disco or old forgotten bangers from the 80s and 90s.