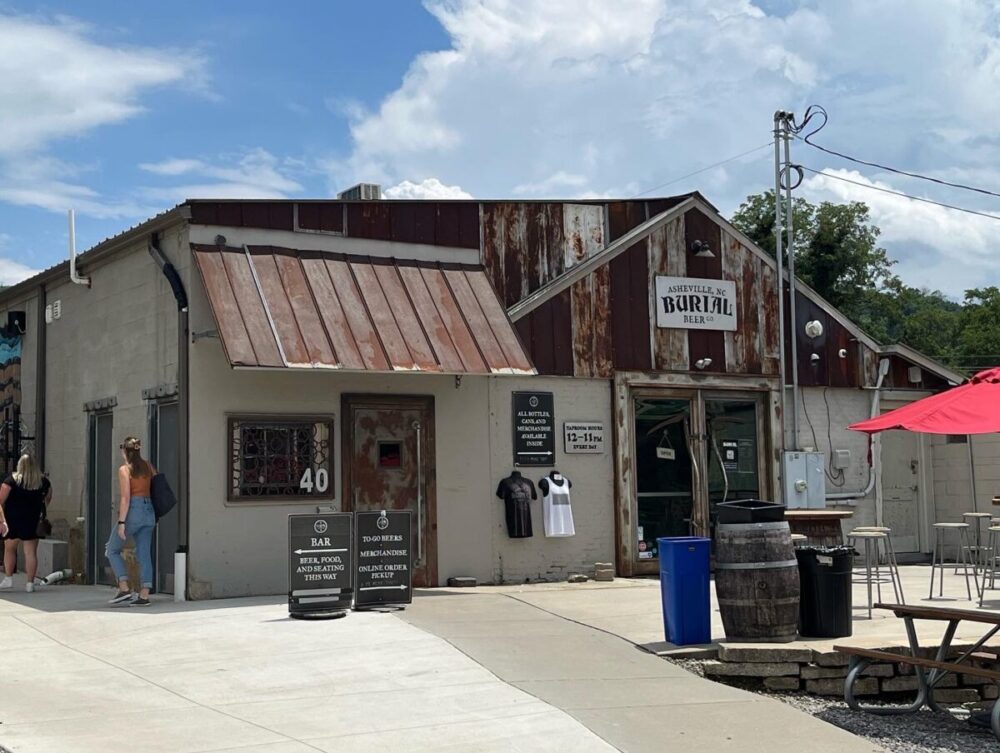 Our Favorite Breweries in – and around – Asheville 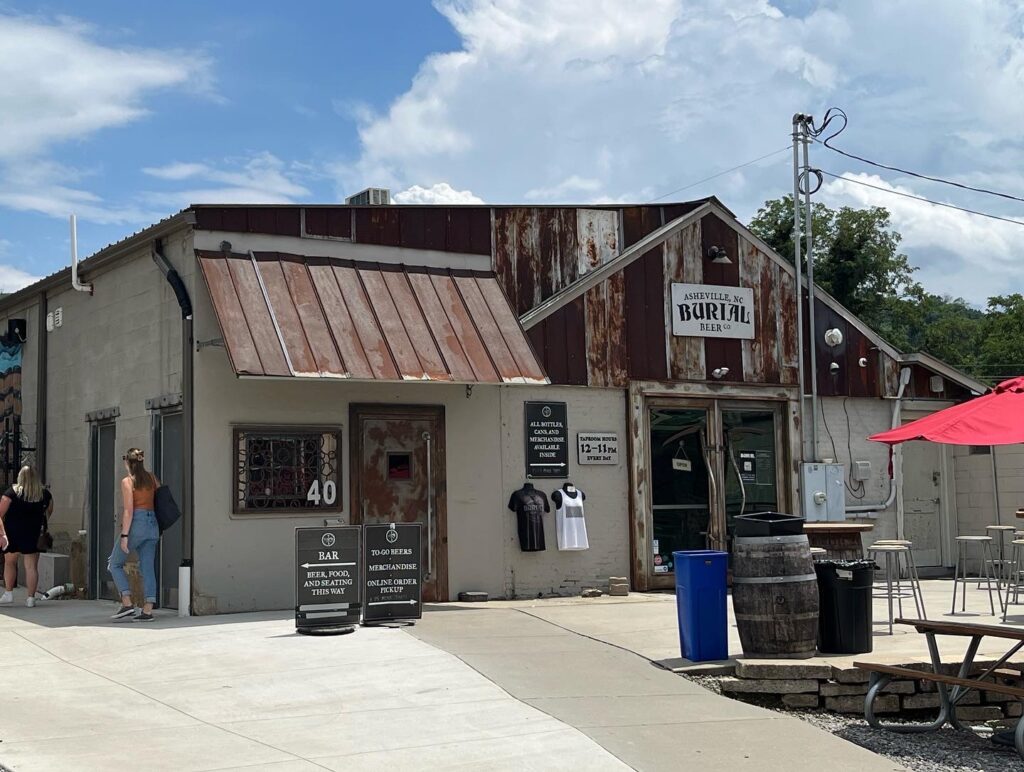 I recently learned the term “brewery in a box.” Basically a name for cookie cutter breweries that look like they all purchased equipment, “Drink Local” signs, and life-sized Jenga games from the same place.

I’ve always noticed this. But the term fits so well, it’s fantastic. Like there’s a catalog called “Breweries are Us” where you can order your very own brewery to assemble with Ikea-like instructions.

Just because anyone can open a brewery now, doesn’t mean they should. To stand out, breweries need cool, unique branding and a great origin story.

There has to be a large variety of quality beer that sells: New England IPAs and heavily-fruited sours while sticking with traditional European lagers and English pub ales. Basically, something for a butt in every seat.

Or declare a niche: “We’re strictly a lagerhaus” or “we focus solely on wild ales.” You won’t wow anyone while churning out amber and red ales all day.

While recently making my way through 22 breweries in the Asheville area of North Carolina, I kept asking myself if I felt the beer and taproom of each fit the “brewery in a box” description. Sadly many did.

Asheville touts having more breweries per capita than any other city in the country. That may be true. Unfortunately, that also means many suck or are easily forgettable.

It was fairly easy to narrow down this list of the top five breweries in – and around – Asheville, North Carolina. Each one has a brand with attitude and verve that makes them stand out from the others. 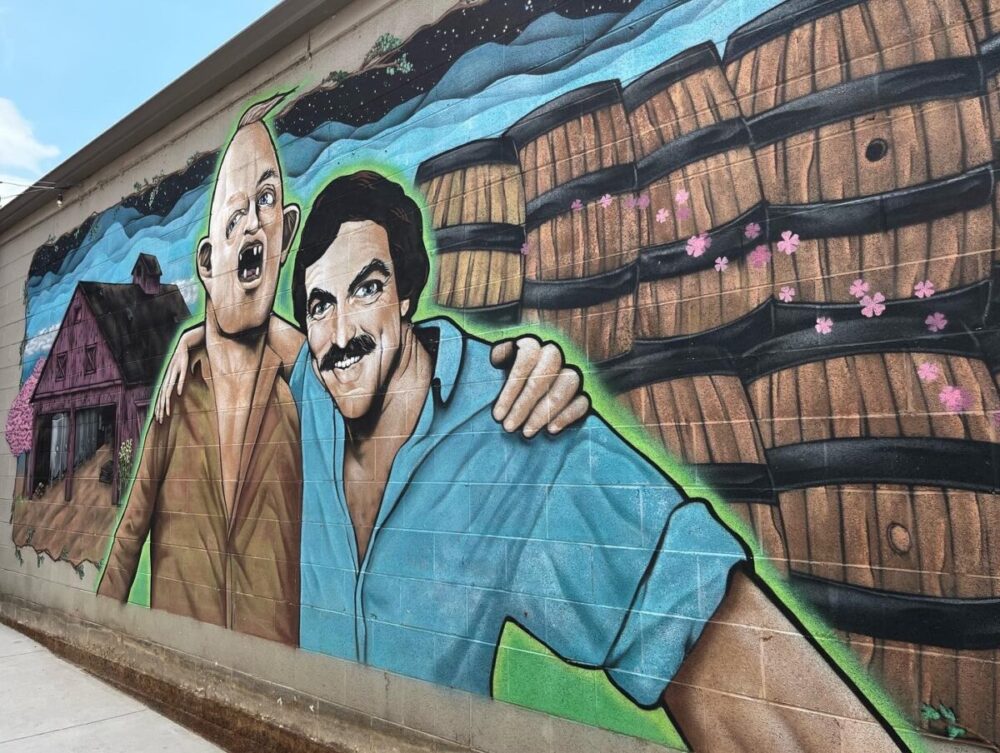 No. 1 of the best breweries in Asheville is Burial Beer Co. The taproom is one of the coolest I’ve been to in the country. My first experience with this brewery’s beer was back here in South Florida.

A friend of mine from Charlotte, North Carolina brought a few of its barrel-aged stouts down to share. He was excited to pour me a sample from a brewery he kept referring to as the “dead guys.” It was one of those ooey gooey pastry stouts with some nice heat from a rye barrel. Definitely a memorable beer, but what stuck with me most was the branding.

Nearly a year later, I was able to experience Burial’s South Slope location in Asheville, North Carolina myself. Walking up to find this rustic barnyard. It has an immersive feel of walking into what could potentially be a horror movie set like the Texas Chainsaw Massacre. There’s even a gutted, broken-down van on the side of the beer garden.

All of the taps on the outside bar are farm tools. I have to say, my favorite decoration in this taproom is its vending machine with lottery tickets and half-finished bottles of Wild Turkey.

It clearly doesn’t work and is loaded with funny items you’d never see like a frying pan and a wad of cash. It’s weirdly creative like some modern art piece that no one understands the meaning behind but still finds fascinating.

The tap list runs the gamut of beer styles. Definitely something for all palates. After visiting, I researched Burial more. The owners once lived in New Orleans, Louisiana.

When residents die, the entire city celebrates with a jazz festival in the street. Burial is an homage to that celebration of life. 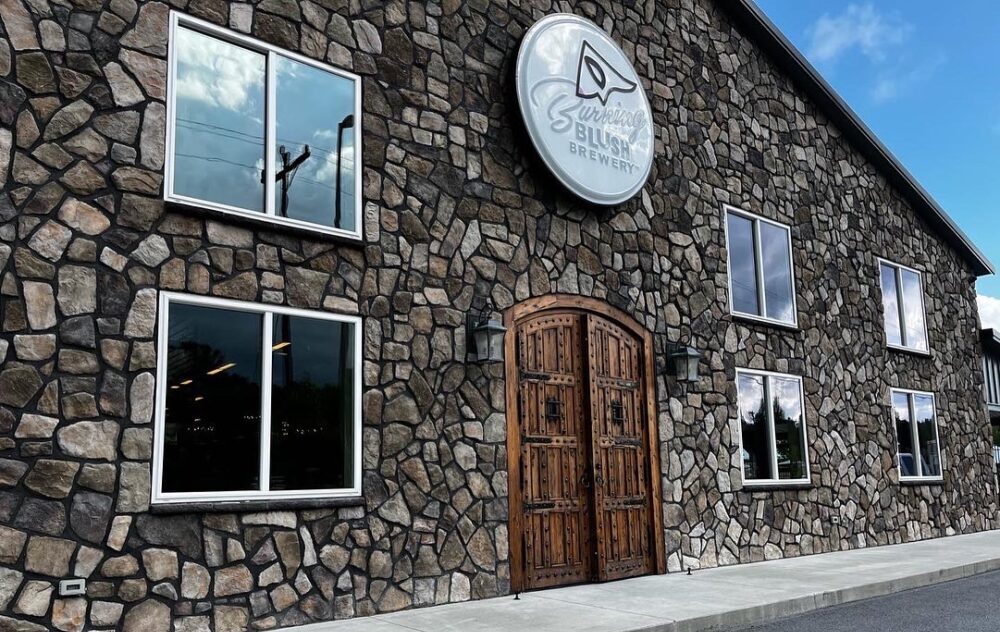 The first image of Burning Blush Brewery: huge and a little weird. This massive 8,600-square-foot building is made of old stone with at least 10-feet-tall wooden castle doors. I couldn’t make out if it was a castle or cathedral vibe at first. But the wooden round table in the taproom confirmed the former.

Witt Lanning, the co-owner and head brewer, told me the name and branding are inspired by an Edgar Allan Poe poem called “Song.” It’s unique and original. My favorite part of this taproom is the beer. Burning Blush makes some of the best beer I tried during my entire visit to North Carolina.

Lanning is the only back-of-house employee. He keeps all five rotating lines full of dark German lagers, Czech-style pilsners, kölsch, and two banger hazy IPAs: one sessionable and another big triple dry-hopped. It’s located roughly 20 miles outside of Asheville but I still feel it’s one of the best breweries in the area. 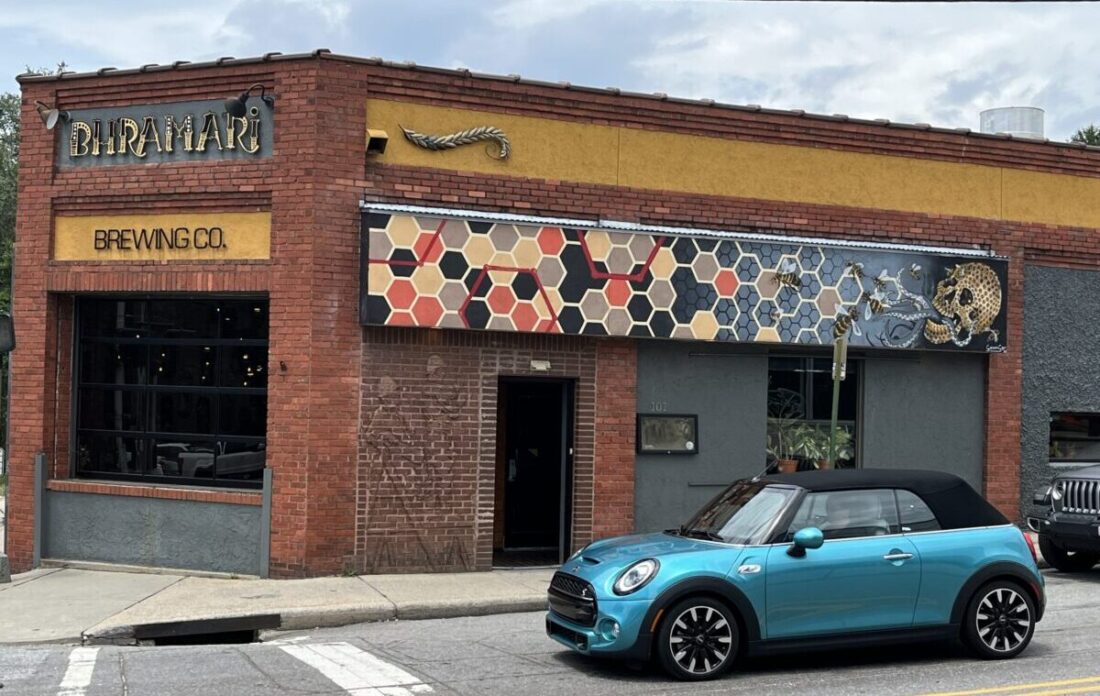 This place has such a cool vibe. Bhramari Brewing Company is located right on the corner of Lexington and Hilliard. So this red brick building almost has a Paddy’s Pub-esque look, but it’s decked out in bee theming. It’s appealing and eye-catching from the road.

Walking through, it’s definitely an artsy feel similar to a nice tattoo shop or trendy bar. The whole bee theme carries into the taproom. There are bee hive-looking light fixtures and art deco resembling dripping honey.

The beer is pretty experimental. They barrel-age pilsners in bourbon, put pizza in beer, make smoked hefeweizens, and a seltzer they call “Bhong Water.”

I didn’t get to try the food but it looked amazing. The pizza I mentioned they throw in beer, it’s a Chicago-style deep dish, and it’s made in-house. I was a little jealous of the tables that ordered some but saved my appetite for a burger at Burial. It was highly recommended and worth the wait. I’ll try the pizza at Bhramari the next time I’m in town. 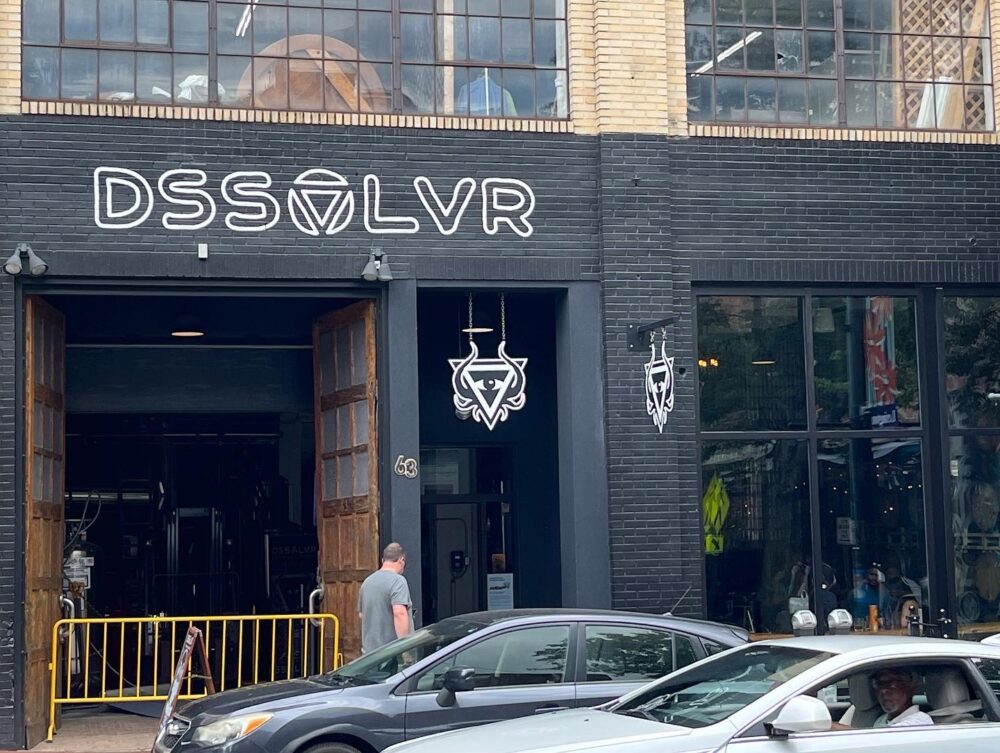 I love a taproom that serves multiple pub ales on cask but still has banger fruited sours and hazy IPAs. It’s better when its taproom is decked out in modern, eclectic artwork.

DSSOLVR’s tagline is “Brewed until Surreal.” The owners told Citizen Times, Asheville’s daily newspaper, they don’t call it a brewing company because it’s a “living brand that’s going to grow.”

On a trip to the Downtown Asheville taproom, I heard five songs from the band Faith No More’s 1992 album Angel Dust. I’m a huge fan of the album because of the music, as well as the story behind it.

The band was just coming off a huge major label success from the previous album and rather than deliver more radio-focused hits, the band decided to experiment and push the envelope crossing genres.

The result is a cult classic album created by a group of artists who stuck to creativity for long-term success over short-term financial gain. While reading up further on this brewery later I couldn’t help but relate Faith No More’s evolution to DSSOLVR’s future plans.

They plan to expand into cider, mead, and natural wine. If the brand and liquid are approached as methodically as that album, a cut following could follow in a similar way. 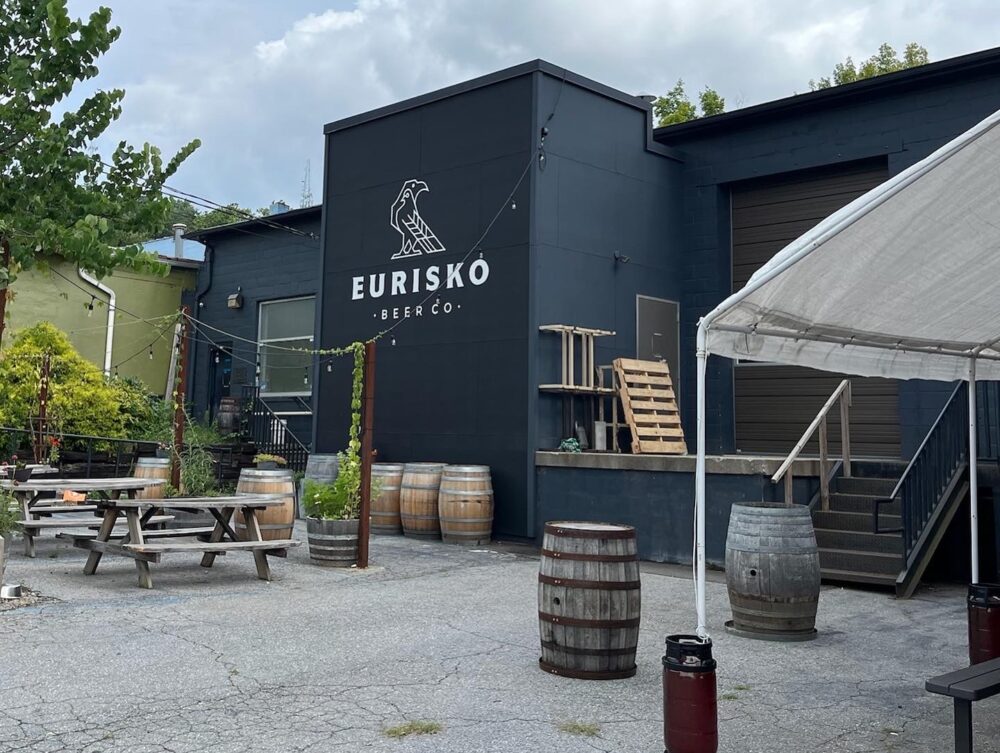 Eurisko Beer Co. is a great brewery we almost didn’t check out and I’m grateful for the happy accident. We had already visited a few duds in the area, then saw this place. It was cool looking enough from the outside but we weren’t sold on anything until grabbing a few drafts at the bar.

I ordered a German pilsner that poured such a clean, crisp, and true-to-style beer. Served in a 20-ounce mug with a nice frothy head of foam, it had great hop aromas and flavor. Though my wife and our friend did order solid hazy IPAs, the pilsner really stood out to me. It was only $4, so it’s a great value.

What I learned about this place is the owners focus on “quality over quantity.”

Brewmaster and co-owner, Zac Harris, has previously told the local alternative weekly newspaper his plan is to “specialize in Old-World beer styles to exact standards.” Harris is a Siegel Institute Master’s Brewing Academy graduate and it really shows in the liquid.

There were only nine drafts, but they ranged from German and Mexican lagers to a very nice Saison. If the goal is making Old-World beer styles, the altbier is proof they’re nailing it.

The taproom is pretty laid back and reminds me of hanging at someone’s loft apartment. You enter the front door to an immediate stairwell. The tasting room is on the second floor. There’s a TV in the back left corner, familiar with someone’s living room.

Safe to say this is the smallest brewery on this list but I’d recommend checking out if you’re in the area. Sometimes a smaller taproom like this is a better option to get lost in a good conversation over great beer.