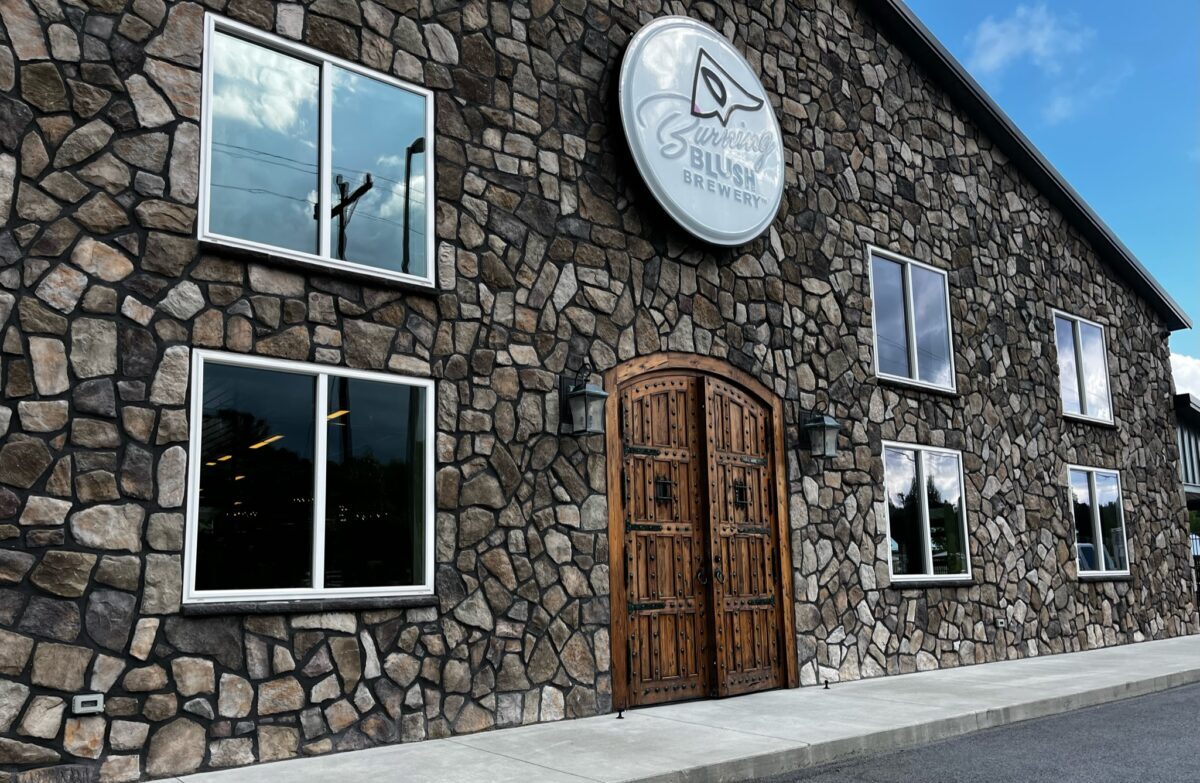 Where the History of Beer, England, and Literature Meet

Witt Lanning always wanted to open an Edgar Allan Poe-inspired brewery. After more than a decade of brewing in Greenville, South Carolina, he and his family brought that dream to life.

Located less than five miles from the Asheville Regional Airport, Burning Blush has prime real estate to showcase a unique and original brewery to a limitless host of customers visiting the three large surrounding cities: Asheville, Hendersonville, and Brevard.

Lanning was adamant his brewery have the spirit of his favorite author in mind. So he modeled the taproom to look like a Victorian-era castle with gothic romanticism peppered throughout. 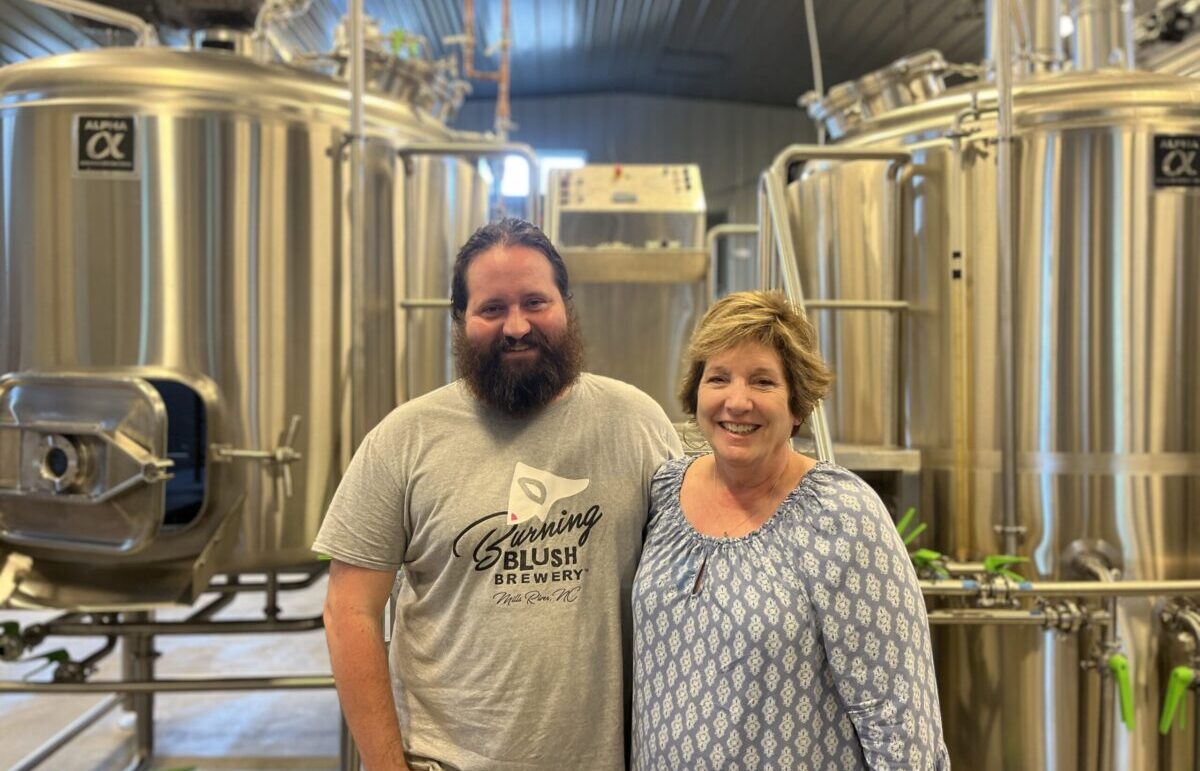 “The taproom of any brewery should be a manifestation of that brewer’s or owner’s personality,” Lanning tells Broward Beer. “I’ve always been fascinated with that style of poetry and storytelling – like the darker and twisted horror-related aspects of things.”

Lanning first got into homebrewing while studying chemistry at North Carolina State. As a graduation gift, his father helped pay for brewing school at Brew Lab in Sunderland, England.

When Lanning returned to the states, he was eager to open a brewery with his father. Wisdom understands youth. Instead, his father told him to get experience in the field before going into business for himself.

“I went up to my dad gung-ho and said ‘I’m ready to open up a brewery.’ He just laughed at me and told me to go work somewhere first,” Lanning says. “We’ll talk about it later. If you have to make any mistakes, go make ’em on someone else’s dime first.’”

Those were wise words. Lanning moved to South Carolina and ended up working for multiple breweries. The experience taught him more about what he was looking for in the beer industry.

After brewing for large 30-barrel contract brewhouses like Thomas Creek and wild yeast experimental breweries like Birds Fly South in South Carolina, Lanning wanted to get back to brewing the kind of beers he enjoys. Many of which he picked up a taste for during his time in England.

View of tasting room facing mural on the front door.

Lanning’s the only member of his family who drinks beer. His parents, co-owners, give him full reign to brew any beer style he likes.

He keeps at least half of the drafts full of old-world lager styles and English bitters.

“For me, it’s like a science experiment every time I brew,” Lanning says. “I mostly focus on low ABV session-able beer styles. I love the taste and flavor of beer so much. I want to have as many as I possibly can to get satiated, but not inebriated. I can drink 3.2% English bitters all day.”

Every draft has Lukr faucets, specially designed in the Czech Republic that pour large beer foam. They’re commonly used for lager beers but he even has his hazy IPAs set up with the special faucets. They make for highly presentable beers for an improved drinking experience.

His three passions are showcased in a mural above the front door of the tasting room: Early brewers, surrounded by a raven. It’s all illustrated in stained glass, an homage to castles Lanning visited while living in England.

“It’s inspired by ancient Sumerians. Many books include them as the first beer brewers,” Lanning says. “They’d throw some old bread in clay pots. Then wild yeast would rain on that bread and it would create the first fermented beverage.”

Lanning attended Brew Lab in 2009.  The drinking experience was completely different than in the states. He says, most craft beer is served from old-time casks and served warm.

He combines all the styles and traditions he loved from there with unique brewing ingenuity to Burning Blush.

Lanning has even designed the entire production process for one back-of-the-house employee: him. Traditionally, most breweries keg the beer they serve in-house and distribute it to other bars.

It takes hours to fill them and even more time to clean. Many brewers get their start in the back of the production facility by cleaning kegs. To cut down on time and labor, Lanning invested in horizontal serving tanks from a company called Paul Mueller. 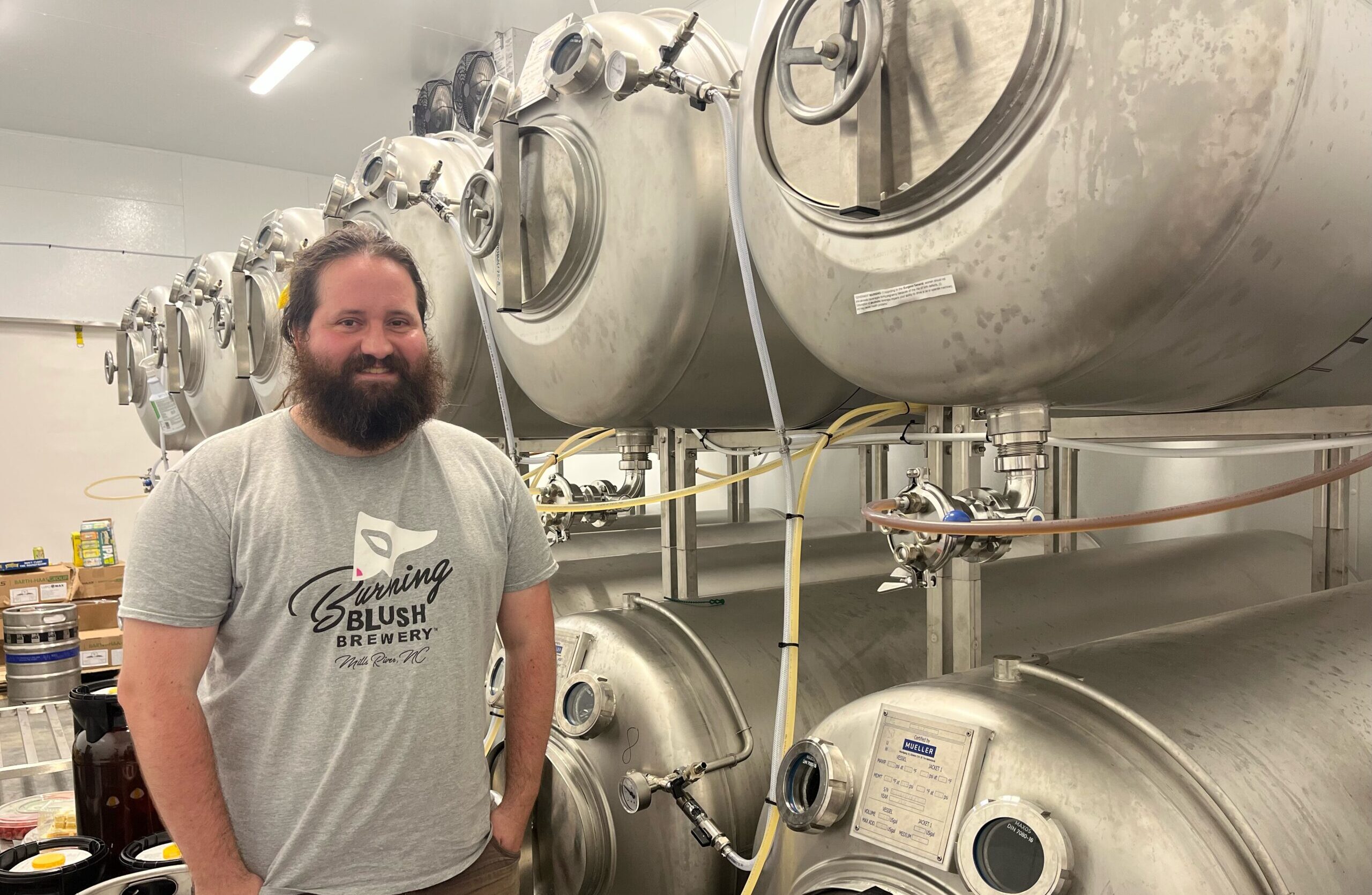 Once his brews are finished fermenting, he transfers them to a brite tank to carbonate the beer and then directly to the serving tanks. It cuts down on cleaning and the use of C02, a supply that’s recently been running low in the beer industry.

Lanning believes brewery owners should add elements of their personality to their taproom. For him, that’s the work of his favorite poet.

Burning Blush is named after a line in an obscure Edgar Allen Poe poem called “Song.” The poem is about a woman Poe was in love with. The two would send love letters back and forth to each other.

The woman’s father intercepted the letters and refused to allow her to marry Poe because he was a poor writer and editor. He arranged for her to marry a wealthier man. She invited Poe to the wedding and her cheek blushed when the two saw each other, a line described as the burning blush.

Near the far left of the building, there’s another gothic, romantic mural of a woman with a raven. Though not accurate to the poem, the art fits the Edgar Allan Poe theme. 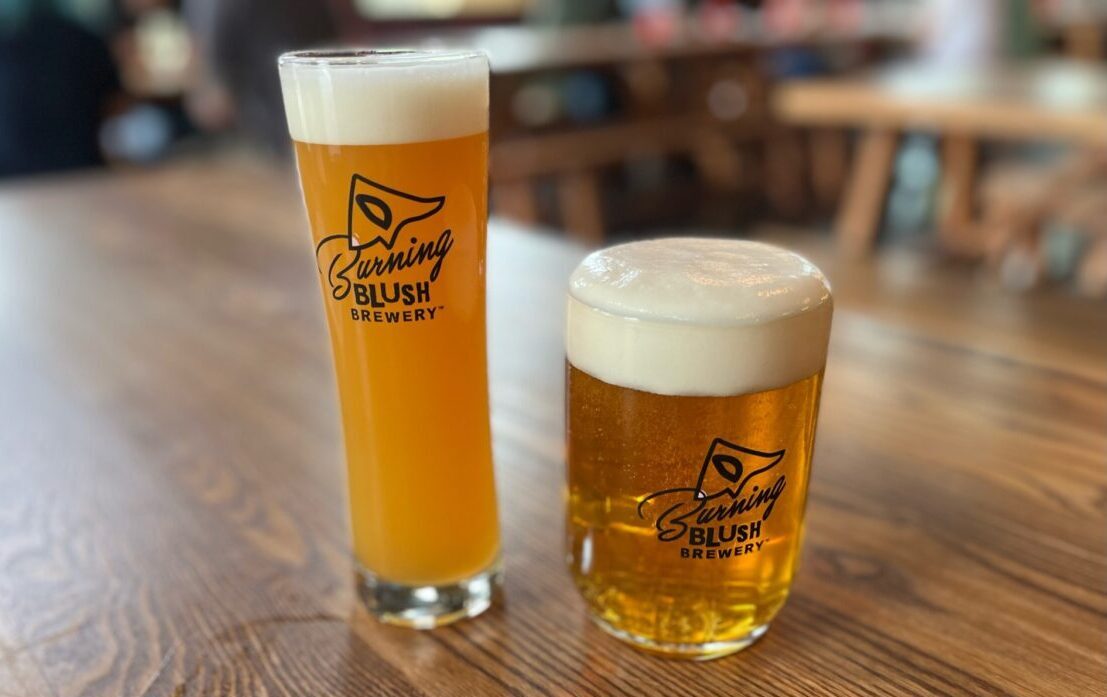 Lanning originally wanted to use the name Macabre for the brewery. The term is defined as “disturbing and horrifying because of involvement with or depiction of death and injury.”

“Mom and dad quickly cut that one out,” Lanning says. “​​They’re like it’s not going to be family-friendly enough.”

Settled on Burning Blush, his father even illustrated the brewery’s logo. It’s the name with a doodle of a woman’s face with a pink dot over her encapsulated cheek. It appears on all glassware and T-shirt.

The concept seems to be working. Despite opening three months before the pandemic, the brewery keeps a steady flow of customers – some regulars but many tourists.

Lanning has no immediate plans to send his beer into distribution and wants to focus on keeping unique and original beers on draft in his taproom.

“It’s been working out so far,” Lanning says. “My mom and dad are happy. So I’m happy.”