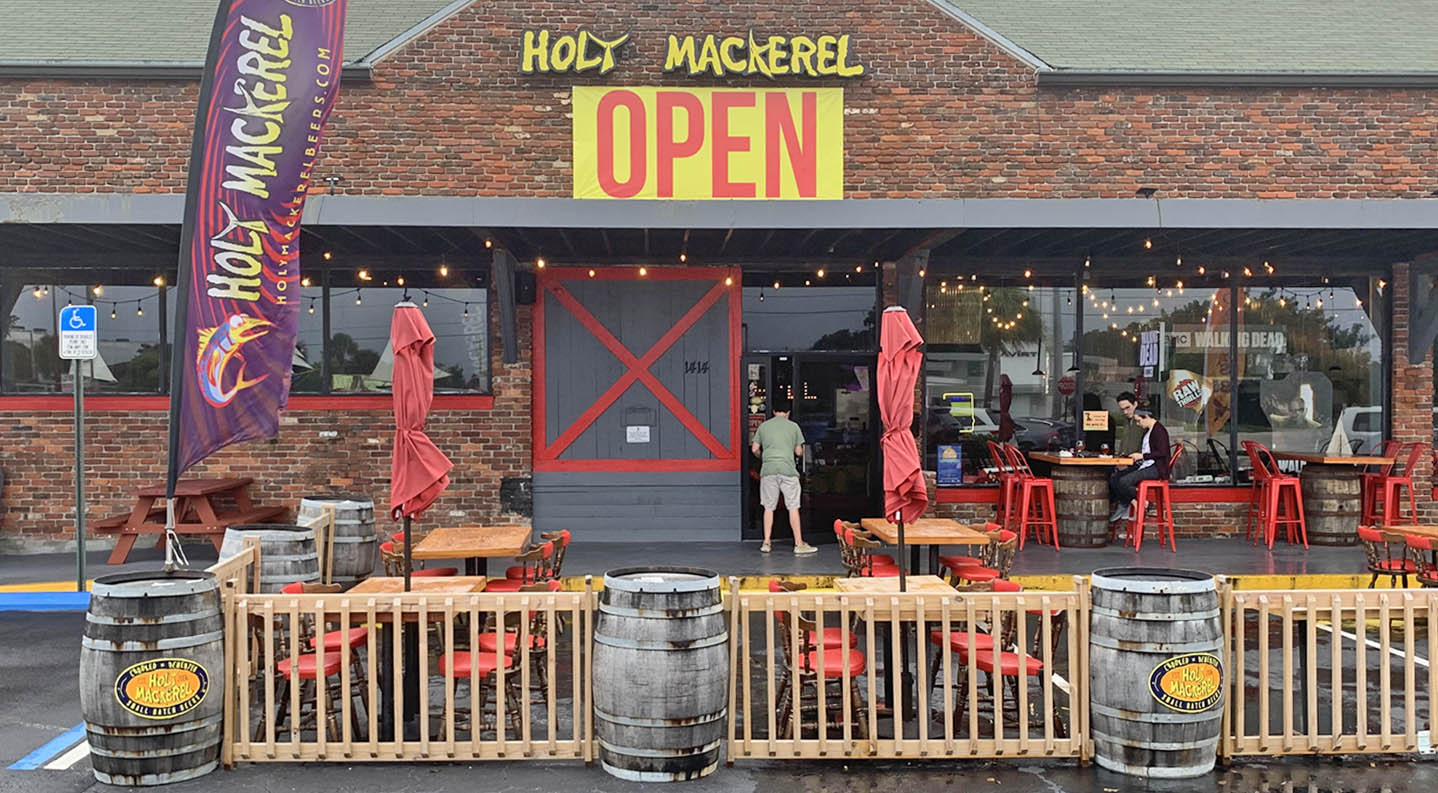 What Do You Call a Brewery That Doesn’t Brew Beer? Holy Mackerel

When you walk into the Wilton Manors brewpub, you see $50,000 worth of brewing equipment. But is it just for show?

But not a drop of beer has ever been brewed there.

Even Holy Mackerel’s website is titled, “Not just a brewery.” So why lie about this? Sources say Barecich is profiting off the ignorance of his customers.

Those patrons think they’re supporting a local brewer, when in reality, Barecich admitted to Broward Beer – in a tense and rambling interview – that he saves money by importing his signature beer from South Carolina. On his menu, he touts four brews, ranging from “Holy Mackerel Special Garden Ale” to “Holy Mackerel Ambition Amber.” But all four are brewed 700 miles and three states away – despite an array of 10 to 20-foot-tall conical fermenters and a 750 to 1,000 Sq. foot brewhouse in the back right corner near the dining room.

Deception is nothing new to Barecich, who was sentenced to a year in prison for fraud in a bizarre scheme that federal prosecutors described as “pretending to be a representative of a multi-billion dollar fund located in Luxembourg.”

That was back in 2014 in Massachusetts. So how did Barecich later become owner of a Wilton Manors brewery that doesn’t brew beer?

The man behind the beer

In July 2015, Barecich was released from prison, according to the Federal Bureau of Prisons. Only a couple years later, he was lauded in the local beer scene for being one of the organizers of 2017’s Fort Lauderdale Craft Beer Sporting Games and Food Fest. 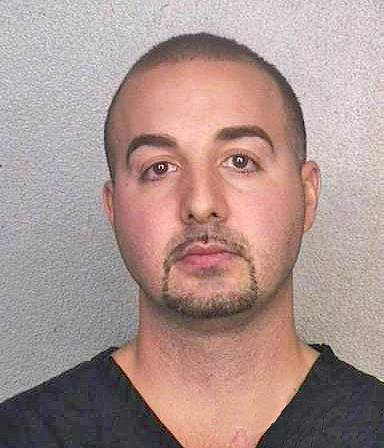 But his day job was marketing data-collection apps for the hospitality industry like theGOapp and Easy Smart WiFi. If you’ve ever asked for the WiFi password in a restaurant and then been bombarded with offers later, that’s the technology Barecich sells.

“Have you ever gone to a restaurant and logged on to the guest WiFi?” he told Broward Beer. “Basically, as you log on – and agree to the terms and conditions – the business gathers their email addresses, cell phone numbers to use for marketing campaigns.”

Except Frank Barecich doesn’t do this. Frank Ba does.

When Broward Beer was reporting this story, no less than a half-dozen sources didn’t know who Frank Barecich was. But they knew Frank Ba.

Barecich hasn’t posted to his personal account in more than two years. While Barecich is vague about his reasons for operating under another name, it’s also true that if you Google his real name, his prison record is one of the top results.

Pretending to be a brewery

A few months ago, a former Holy Mackerel employee said Ehab Atallah – who co-owns Holy Mackerel with Barecich – told them, “In this pandemic, why am I going to hire a brewer at $80,000 a year and order a bunch of ingredients when I can just have Thomas Creek make the beer?”

It’s unclear if this was the plan when Barecich bought Holy Mackerel and the brewing recipes from its original owner Bobby Gordash in February 2019. The opening of the new Holy Mackerel brewpub was sketchy enough that the Sun Sentinel headline was, “Holy Mackerel! Something fishy brewing at Old Florida Seafood House.”

One thing Barecich was adamant about: “Holy Mackerel is very clear Gordash has no affiliation with the brand,” Barecich told Broward Beer. Yet Gordash’s biography is on Holy Mackerel’s website, which Barecich – a digital marketer – said he was unaware of.

Why would a “brewery” with unused tanks keep a biography of an industry veteran on its website? Some sources say it’s to bolster Barecich’s reputation.

For those who don’t know, Holy Mackerel is one of the first craft beer brands in Florida. Gordash won the 1996 Sam Adams LongShot homebrew contest. Ten years later, he launched Holy Mackerel Brewing and had his recipes brewed on contract – at Thomas Creek Brewery in Greenville, South Carolina.

This is important to point out because Barecich’s location in Wilton Manors is called “Holy Mackerel Small Batch Beers,” but still sells the contract recipes at the bar.

Gordash declined to comment on this story, other than confirming he sold the brand to its current owners two years ago.

The former employee told Broward Beer, “Bobby currently owns 2 percent to be the face of the brewery. But nobody’s supposed to know about it.”

Barecich blames the pandemic and city of Wilton Manors for owning a brewery that doesn’t brew beer. He says there are “procedures and contracts that need to be in place.”

What are those? During a 50-minute call with Broward Beer, Bareich would only say the city won’t give him the “green light” to brew beer. When pressed for specifics, he replied, “I don’t have that information. I only handle marketing.”

In fact, in September 2020, the city eased its rules so more breweries could open in the area. That same month, Holy Mackerel updated its license with the city.

Roberta Moore, Director of Community Development Service for the City of Wilton Manors.

The license also has a special “brewpub” qualification, which in Florida means it can legally produce 5,000 barrels of beer to serve to guests on the property. The city will even allow them to send guests home with up to 128 ounces in a special container called a growler.

The original application and business proposal – both filed in December 2019 – say it’s opening a “full-service restaurant that will brew its own beer.”

One Planning and Zoning clerk also said Holy Mackerel fared better financially during the shutdown than most bars and nightclubs because the business was allowed to sell food.

Open before the pandemic

Holy Mackerel wasn’t the only brewery to open last year. Last January, the Sun Sentinel reported 7 South Florida breweries opening in 2020 – with Holy Mackerel at the top of the list.

Barecich and others in the local beer community have argued Holy Mackerel planned to brew beer eventually. But the other six breweries on the Sun Sentinel’s 2020 list opened with beer produced onsite flowing from the tap.

Here’s one way you can confirm a brewery is as local as it advertises: By law, breweries pay taxes on the beer they produce. Every month, a state agency called the Department of Professional Regulation publishes a “Summary of Reported Beer Sales.”

To date, Holy Mackerel hasn’t paid taxes on manufactured beer. Why? There’s nothing to report.

In July 2020, the Florida Brewers Guild, a craft beer industry trade association, wrote a letter to Governor Ron Desantis and the Florida Department of Business and Professional Regulation stating, “100 breweries may close in two weeks without help.”

What help were those breweries looking for? Changes to the law.

At the time, businesses with food licenses – like Holy Mackerel – were allowed to operate during the pandemic. Meanwhile, breweries couldn’t reopen for onsite consumption. Florida breweries remained closed for nearly another two months.

“A local brewery is a place that produces beer,” Barecich answered.

After pausing for five seconds, Barecich added, “or the term could be used in different ways. I mean we create the recipes.”

Will Holy Mackerel ever brew beer?

“I don’t have an answer on that,” Barecich said. “At this particular point, we’re saving money and spending it elsewhere.”

A bus with Holy Mackerel’s branding parked in the shopping center located at 1414 NE 26th St, Wilton Manors, FL 33305. The bus can be seen from Wilton Drive.

As one source who works in the Florida craft beer industry – and requested anonymity – told Broward Beer, it seems like this business model is a lot more trouble than to just be a real brewery.

“I’d tell [Barecich] just brew some beer. Even if it’s crap, dump it out,” the anonymous source said. “Just so you can say that we’re an operating brewery. Do something.”