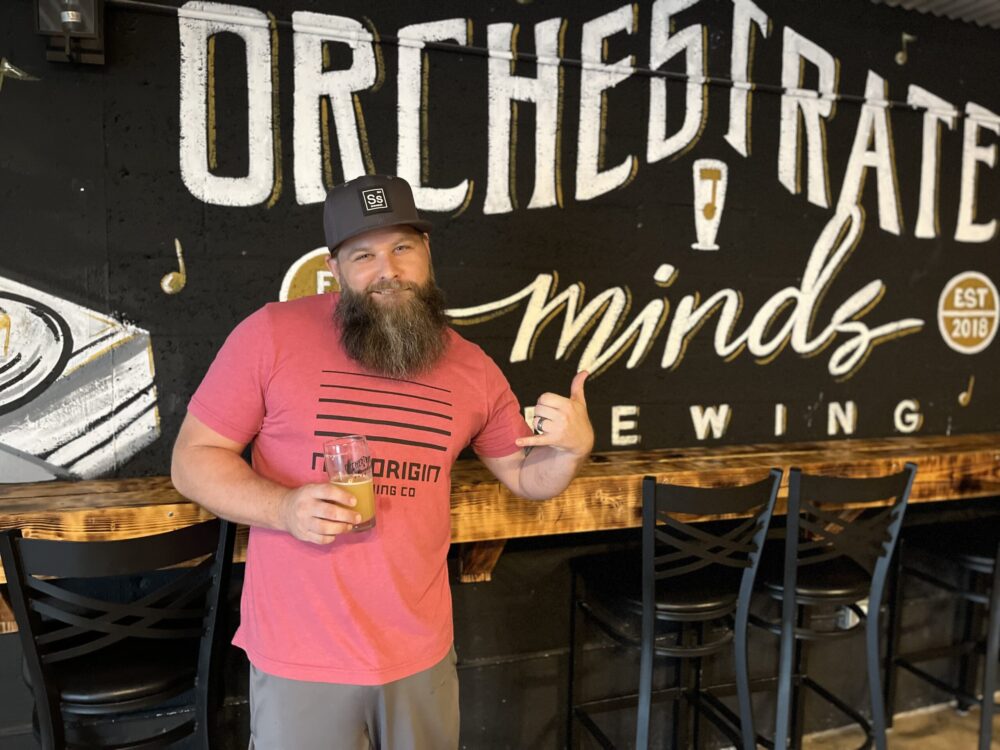 The Smallest Brewery in Broward County to Celebrate its Biggest Year

This Saturday, Orchestrated Minds Brewing will throw a huge bash for its three-year anniversary.

Davy Martin gambled with his robotics engineering career and life savings to open the smallest brewery in Fort Lauderdale. After three years of betting on himself, it’s starting to pay off.

In September 2019, Davy and his wife Jaime opened Orchestrated Minds Brewing with a one-barrel pilot system. Self-funded and operated, the Martins were the brewery’s only employees.

They now employ two bartenders, have launched a rare bottle membership program and expanded to a 3 1/2 barrel brewhouse with four fermenters – with most growth happening in 2022.

“Things are starting to come to fruition,” Davy Martin, co-owner and head brewer of Orchestrated Minds Brewing, tells Broward Beer. “We’re starting to make connections and build honest relationships with folks that genuinely want to work with us.”

The brewery has poured at 10 festivals and released more than 30 collaborations throughout the country over the past 12 months. Broward Beer recently caught up with Martin about moving past adversity to the largest year of growth.

Dollar and a dream

The burgeoning business really started as a passion and a hobby.

Eight years ago, as craft beer was making its introduction to South Florida with breweries like Funky Buddha, LauderAle and J Wakefield, Martin was traveling around the country visiting other established breweries. Notably Treehouse and Trillium in Massachusetts.

He recalls the beer coming out of South Florida was good. But breweries in the northeast produced a beer style he fell in love with and wanted to duplicate – New England IPAs. So he started making his own in his backyard. 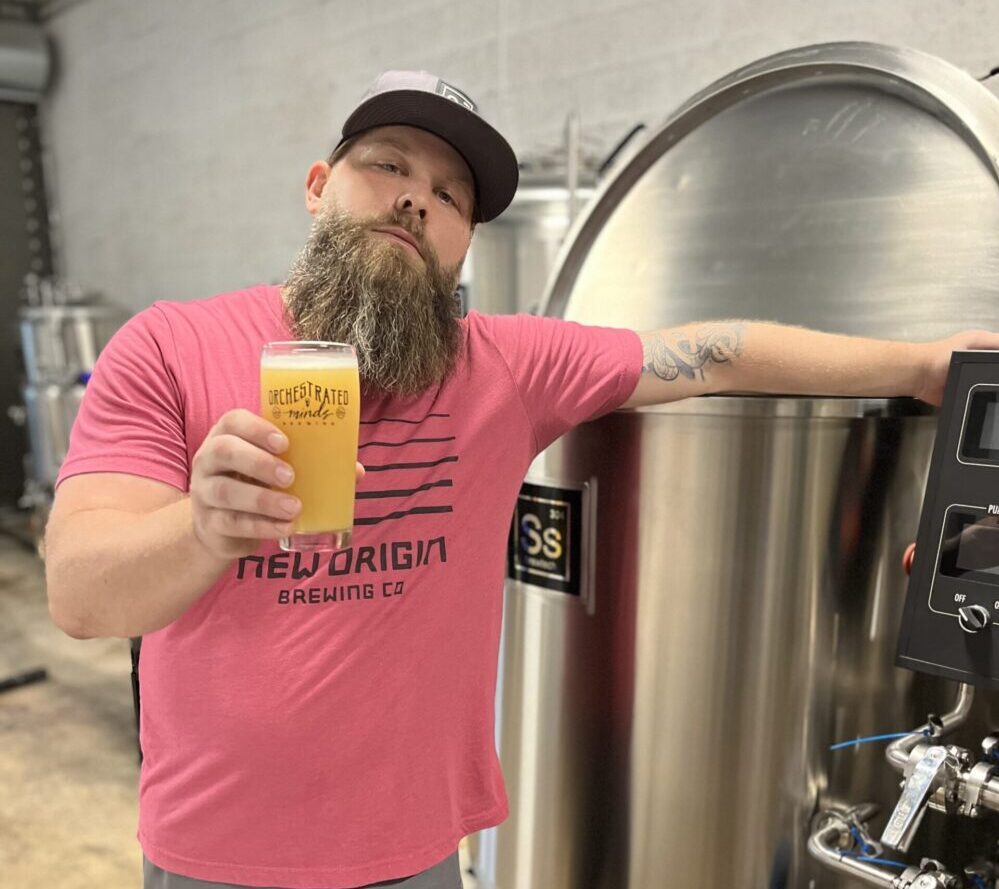 Once he hit a stride and felt he had a firm grasp on brewing, Martin started passing his beer out for free at monthly Art Walks in Flagler Village. After two years, he built up the confidence to make it a business.

“When you’ve got a good career, you’re giving up a whole lot to bet on yourself,” Martin says. “I was like ‘yo, I think people will fuck with this. So we took a chance on ourselves.”

The City of Dorsey Riverbend, which is a small up-and-coming community on the outskirts of Flagler Village, gave them the green light.

The husband and wife duo were hands-on with the build-out of Orchestrated Minds. Their personalities and lifestyle show in the decor, artwork and music in the taproom.

But before opening, Martin made sure the people of Dorsey Riverbend also welcomed the brewery.

“We literally had to go and hit the pavement and knock on all our neighbor’s doors and ask, Do you mind if we come in?” Martin says “There’s a church, a Boys and Girls Club right here. We wanted them all to be comfortable with us.”

A warm welcome from the surrounding neighborhood is one thing. Earning respect from the beer community is another obstacle.

Martin admits the business plan ironically paired sustainability with humility. The only winning formula is old-fashioned passion and hard work.

“We opened knowing no one in Florida is going to care about us, they’re going to take us as a joke because we’re so small,” Martin says. “I remember people telling me all the time, you’re going to have to brew every day – that system is tiny. And I said, well, I was a robotics engineer for a long time. Nobody ever said to me I’d have to punch code all day, every day – that’s just the job.” 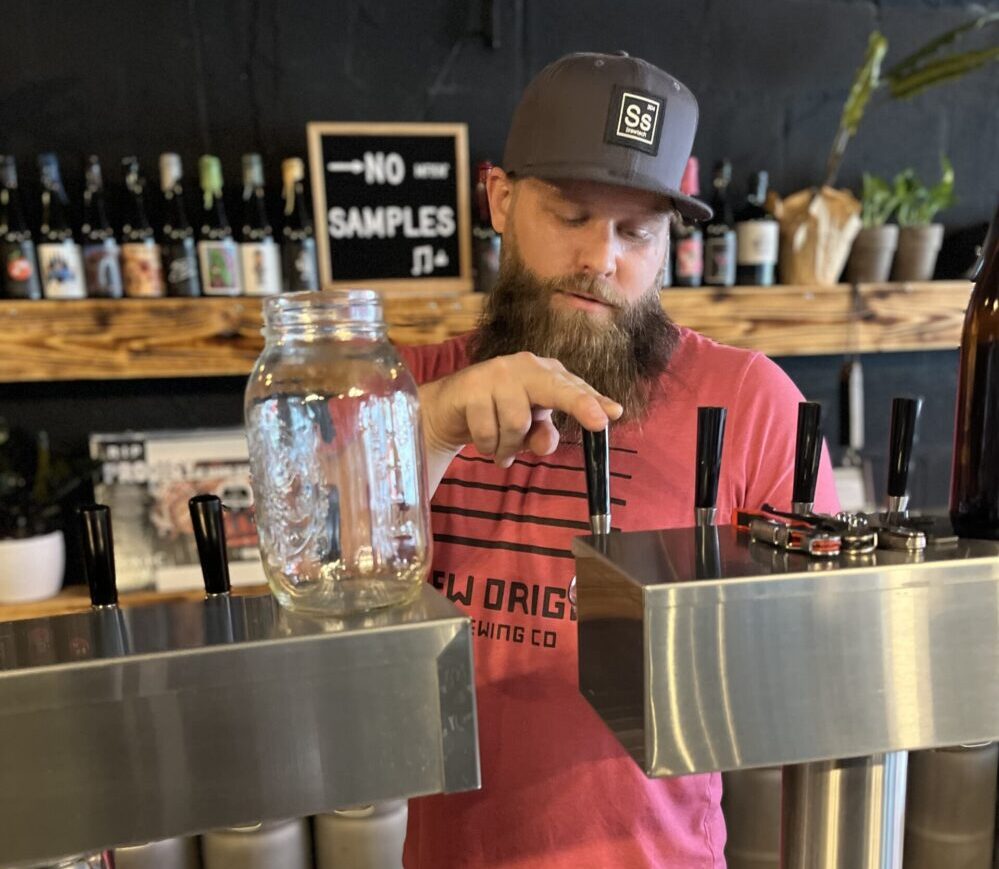 Back in 2020, Broward Beer reported on Orchestrated Minds’ first anniversary. The city had a water main break that wreaked havoc on the brewery’s water chemistry. Users of the popular beer app Untappd criticized his beer, calling it “garage water.”

That adversity became a learning opportunity to approach every batch of beer as a chance to innovate.

Flash forward to today and the brewery has quadrupled its production since the first month in business, state records show.

One life, one shot

That’s a big feat for opening a taproom-focused brewery six months before the pandemic forced bars statewide to shut down. Martin says the couple was aware their small brewery would face a battle uphill – he just couldn’t predict how tall that hill would grow.

Some of his peers haven’t always welcomed his vision.

At times that meant larger brands overlooked Orchestrated Minds for collaborations and invitations to pour at popular festivals.

Years ahead, the couple planned for negativity by forging relationships with respected breweries like Bottle Logic and 3 Sons. Those collaboration opportunities helped earn credibility and experience amongst an often jaded fanbase and industry.

Martin in front of cooler of guest draft kegs.

“We just happened to open at the exact wrong time for everything. So it came down to two things: work ethic and quality of product,” Martin says. “I’m gonna make everybody sick of my goddamn face. Your favorite brewery? I’m doing a collab with them, and I’ll be traveling when they invite me to their festival. You may not like me – but you’re going to see me.”

Now officially in year three, Orchestrated Minds has solidified a loyal following by word of mouth. With new brewing equipment, Martin plans to double their barrel-aging program by halfway through next year.

“I don’t care how hard I gotta work,” he says. “I’m going to get everything that I want out of this life. I get one shot, and I’m gonna squeeze that melon until I get exactly what I want.”