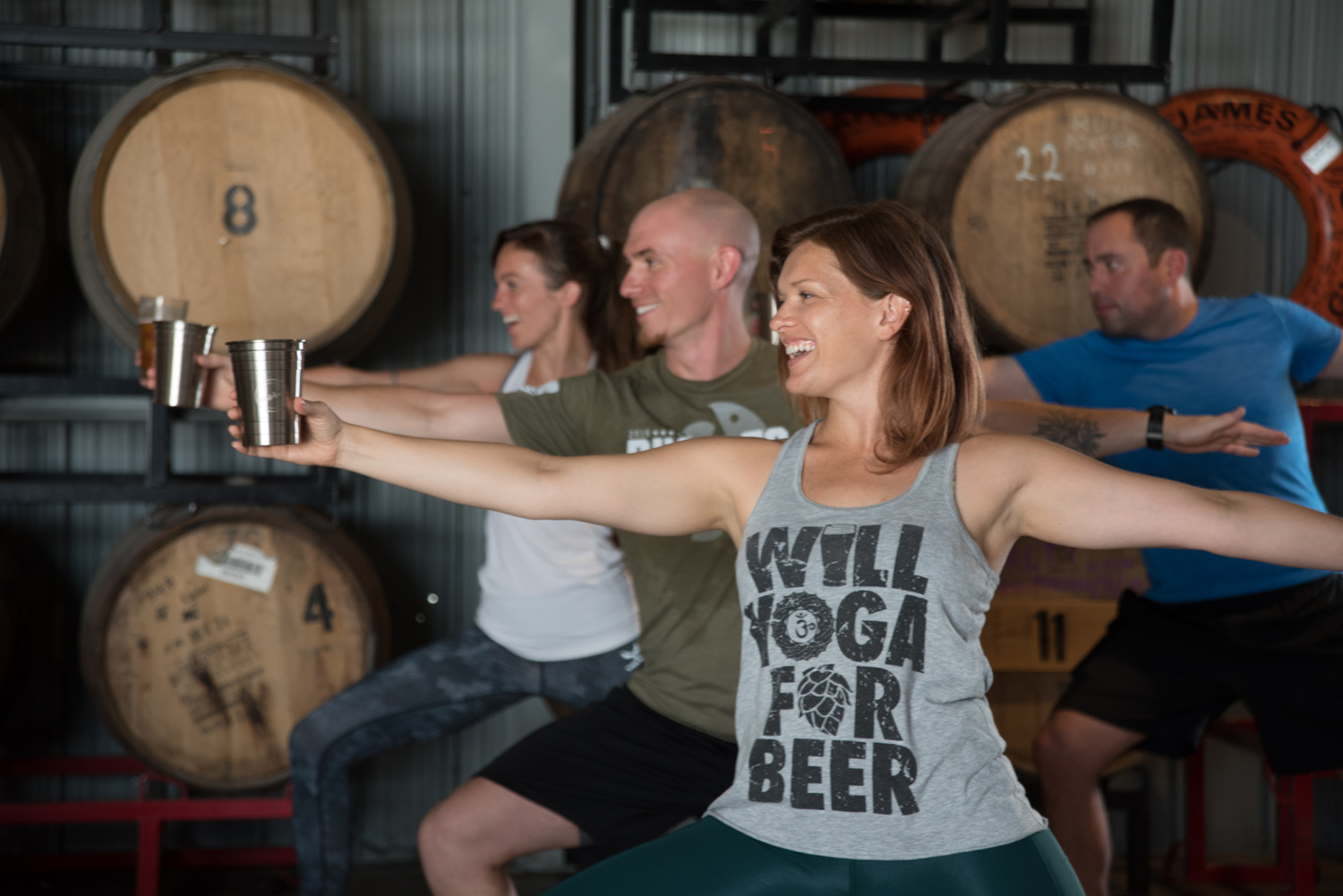 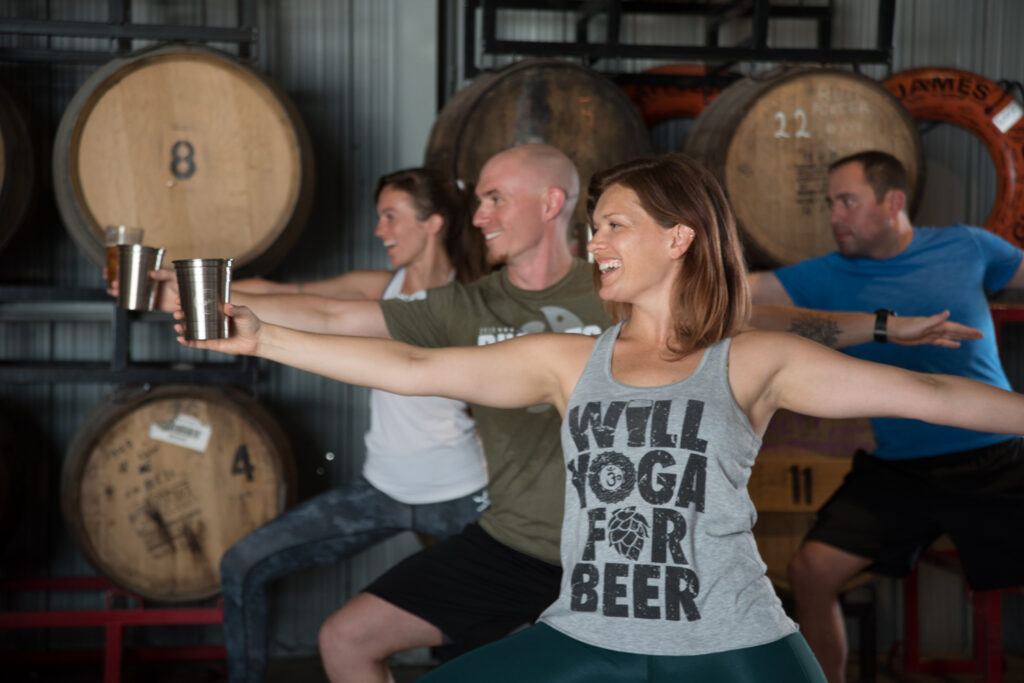 ‘Ales & Asanas’ went from being a monthly event for charity to a weekly, hour-long class.

When Alyssa Gruber first approached the owners of LauderAle to open the taproom early for a yoga class, she had no idea it would later lead to a weekly event on the brewery’s calendar.

Gruber has been teaching patrons to balance their lives – and beer on their heads – since March 2017. This Sunday, her class will celebrate its three-year anniversary at LauderAle.

“I joke that I turned LauderAle into my yoga studio,” Gruber told BrowardBeer.com. “At first I thought maybe I’ll have fun for a little bit. Who knew three years later there would be 40-something people regularly coming to my class?”

The term “ales” like the beer type and “asanas” like the seated yoga pose – Gruber came up with the name, Ales & Asanas due to its clever alliteration.

Although Gruber has been practicing yoga for more than 20 years, she didn’t become a certified yoga instructor until 2017.

Shortly after receiving her teaching certification, Gruber had an “aha moment” one night while having a beer after work.

“I was relaxing in the taproom at LauderAle after a stressful day,” Gruber, 35, said. “I was like ‘I wonder if it would be cool if I started doing yoga here?’ And I just went for it and asked.”

It’s not clear if Ales & Asanas is the first yoga class held in a brewery – but she definitely put her own original touch on the idea. 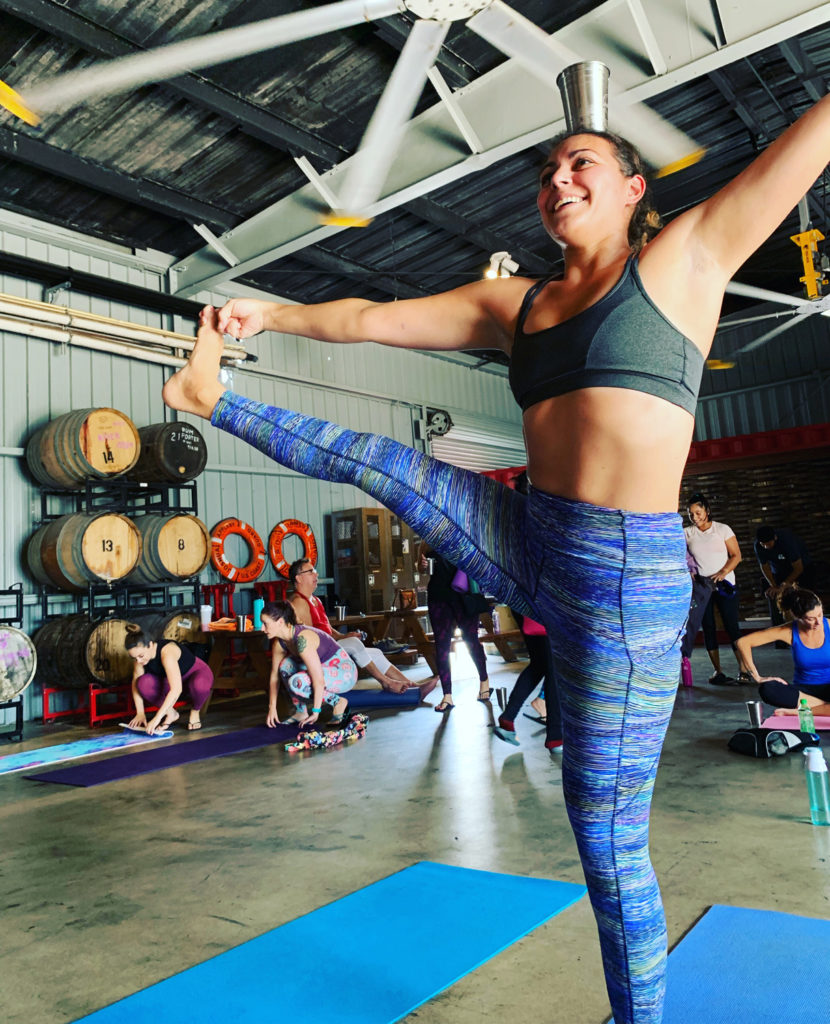 Yoga student balances a cup of beer on her head during Ales & Asanas class in LauderAle taproom.

“There may be yoga at other breweries here and there but I’m like ‘hey, let’s balance this on our heads like a bunch of idiots,’” Gruber said. “In other yoga classes, you might use a block or a weight as a prop – in my class, you use a beer. You really have to focus and challenge your balance so you don’t spill your beer.”

The class has become a community

Gruber admits the class has turned into something more personal than she originally thought. Attendants treat it like a community.

“[Yoga students] share so many things with me,” Gruber said. “They tell me about their families and their personal journeys. People apologize if they’re not going to come next week.”

Ales & Asanas participants receive 25% off their bill at LauderAle. After spending $10 on an hour-long yoga class – which includes a beer – attendants get an additional discount. It’s not out of the norm for people to hang out and get to know each other after class ends at 11 a.m. 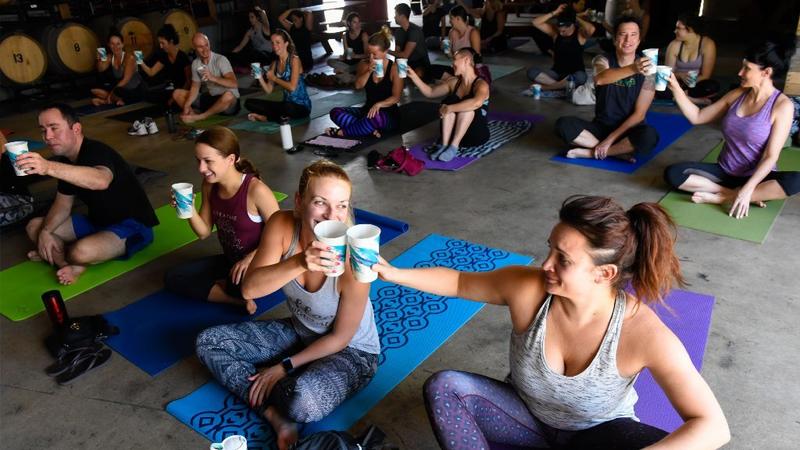 Yoga students give a “cheers to their neighbor” in every class.

“[My students] don’t feel quite as self-conscious or nervous as they might feel in a traditional yoga studio,” Gruber said. “They get their yoga on, then kick back with a beer afterward”

You can get tickets to Ales & Asanas on Eventbrite for the $10 advance price or show up the day of at the LauderAle taproom for $15.