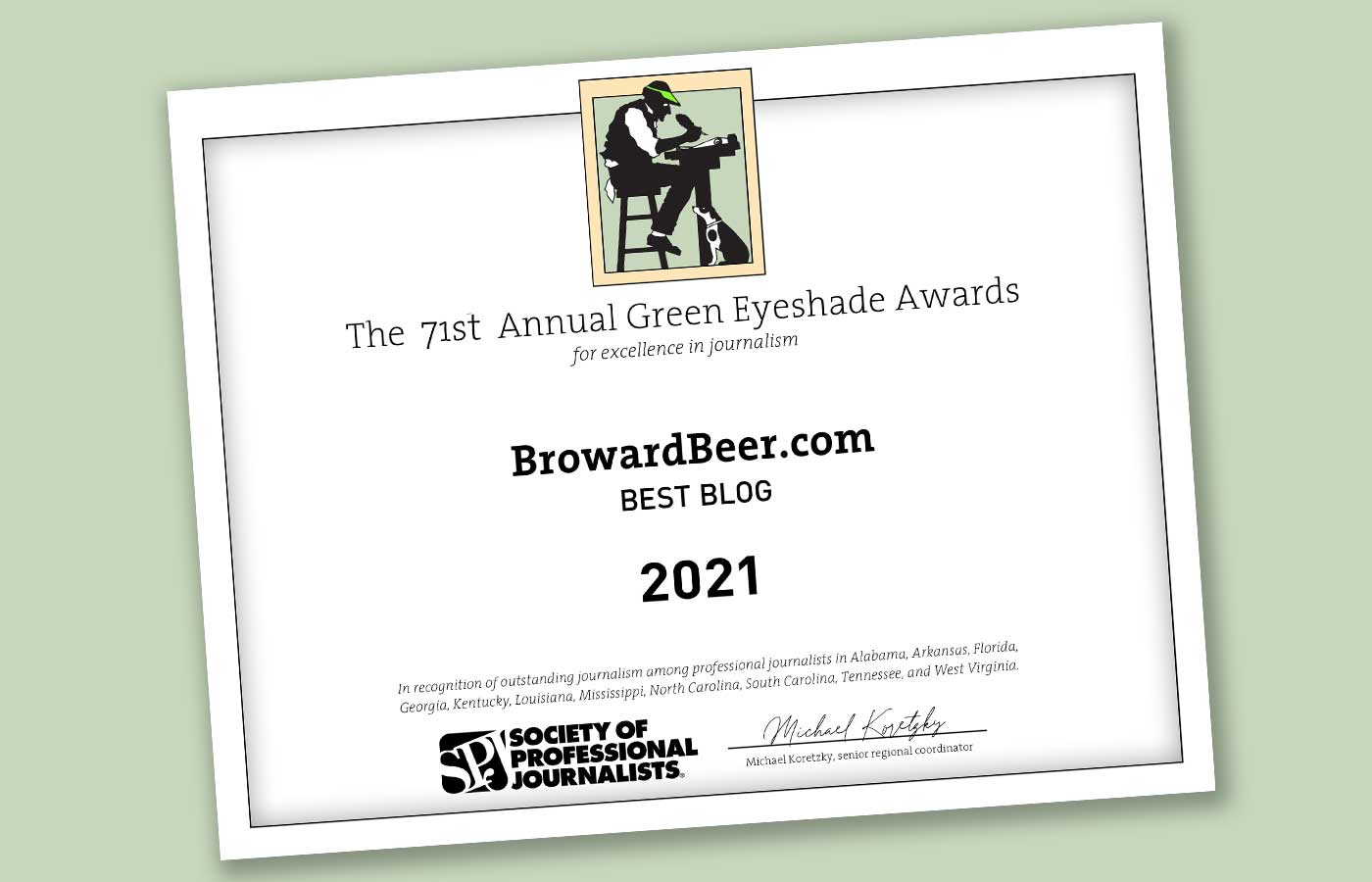 Photo from the Society of Professional Journalists.

Photo from the Society of Professional Journalists.

Since 1950, the Green Eyeshade award has judged the best journalism in the 11 southeastern states. Broward Beer is the award’s first-ever beer blog.

When I left college three years ago, I didn’t think my first professional journalism award would be for my personal beer blog. But here we are.

BrowardBeer.com received First Place for “Best Blog” in the 2021 Green Eyeshade Awards, a contest recognizing the best journalism in the Southeast for more than seven decades.

The blog category was created in 2006. And this is the first-ever publication focused on craft beer to take home the award.

“I’ve been directing this contest since 2011, and I actually went through older records and looked that up,” says Michael Koretzky, senior regional coordinator for the Society of Professional Journalists, the nation’s largest journalism organization. “Past winners have been newspapers and magazines from Memphis, Louisville, Tampa, and other places. The last South Florida winner was a couple years ago – Michael Mayo’s The Eat Beat Blog.”

When I first launched this site in 2020, I looked to other beer blogs for inspiration. Most of them used a review system for the author’s favorite beers and repurposed press releases for news. That didn’t cut it for me.

I wanted to read real news and analysis based on interviews and reporting. So I figured I’d cover the growing craft beer community in my neighborhood the way any newspaper beat reporter would. Since Day 1, it’s been my mission to bring together local journalism with local craft beer.

With the current outpouring of misogyny and racism in the craft beer industry, I see a need for journalism now more than ever. It’s a journalist’s job to analyze the world around them and give a voice to those who can’t speak.

But as much as craft beer needs to evolve, so does journalism.

“I’m sure some traditional journalists will look at a craft beer blog winning a Green Eyeshade as a sign of the end times. I look at it as the beginning of a new kind of journalism,” Koretzky said. “Newspapers have restaurant reviewers and magazines have wine critics. Why can’t a blog cover craft beer? It certainly can. And it can win a big award for doing it well.”

It took one year to win this award. Time will tell where this blog is this time next year. Right now, the goal is to grow and expand coverage to more counties throughout South Florida.